I still remember my first DragonBall Evolution game on PSP. The story starts through boxed dialogues with Grandpa Gohan training Goku. The student takes at least two heads from the teacher. After a brief exchange of words, the old man establishes two guidelines: the first is that ” the first rule is that there are no rules ” and the second, contradicting the previous one, is that the first to touch the ground loses.

That phrase is a direct reference to the starting scene of the film, where the same dialogue occurs while both have to fight, maintaining that balance tightrope walker on a rope lying some distance from the ground. Guess what? After the dialogues, just after the stage and interface were shown, the two fighters appear with both feet touching the ground, facing each other in the courtyard of their home. 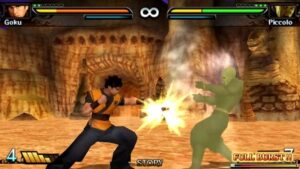 Very soon after I understood: the one who had lost was the one holding the console. Either that or directly the plot of the game went on one side and those in charge of designing the rest of the story mode went on the other.

The combat faced Goku with the appearance that he looks at the end of the film, (with exaggerated blue bell-bottoms) with the diminutive grandfather Gohan, or rather he invited me to test the controls until pulverizing a poor old man who -to his misfortune – he didn’t defend himself enough.

That kind of thing doesn’t make you feel good, but worst of all, that was the first of many fights in which it doesn’t matter if you win or how you win, if necessary, with a final cinematic your victory is canceled so that the plot advance at convenience.

And the second fight was even worse: the portraits of our protagonist and one of the thugs from his institute collided on the screen while the dialogues sprouted in the lower box, is only the prelude to an endless succession of events in parallel to the film that To make matters worse, they did not lead to anything playable.

The story mode of the DragonBall Evolution game is a bad adaptation of another bad adaptation, and that does not make it good but quite the opposite, but what about as a fighting game? After all, Bandai Namco was already quite acclimated to launching one-on-one titles on polygonal stages. The quick conclusion is that at least you want to be accessible if what you want is to limit yourself to mashing buttons. That and, as we will see, a point of originality. 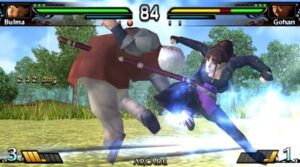 The combat system basically consists of striking without thinking too much. And that came from pearls for Survival mode, all be said. You can bother to figure out the special moves and the definitive ones, but that has neither head nor tail: in most cases, Bandai Namco mixed animations of the Dragon Ball Z Budokai (to which he removed the finishers) with completely generic attacks from other fighting games.

Other characters, on the other hand, used firearms, jetpacks, or definitive cinematic attacks as ” spectacular ” as running over an opponent with a car in the middle of the game. And the gameplay sensations didn’t go any further: there were characters, like Chi-Chi, who could be saved from the purge, but overall it seemed that they hadn’t bothered much to prove that this chaotic contrast of styles worked. And that made the inclusion of an online versus even more absurd.

The selection of fighters, on the other hand, is limited to what was on the big screen. In other words, absences are as loud as they are painful. The usual Goku and Yamcha are joined by the not so frequent of seeing Roshi and Grandpa Gohan as initials. Seen in perspective, it makes sense – unlocking characters is the only thing the main mode really brings to the player. 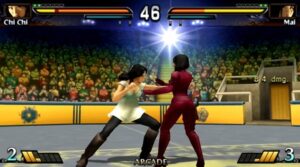 Later, based on playing, they will join Chi-Chi, two variants of Piccolo, a Goku transformed into an ape only a little taller than the initial one (or rather a hyper muscular, hairy, and monkey-faced alternative), a henchman demonic called Fu-Lum created to do filler, a Bulma who jumps into the ring with loads of weapons but usually uses punches and kicks and finally the cinematic Mai – that person who does almost all the dirty work, both in the movie as in the game, without charging enough.

Unquestionably, we are facing the least attractive panel of fighters within the long history of Dragon Ball in video games.

Not everything was crazy, of course. the finishes of the characters were quite correct and, without surprising, an interesting advantage was taken of the textures to give some solidity and detail to each fighter, lightening the number of corners of the models to add an extra point of fluidity in the combats. Which, of course, makes its animations and control system more difficult to justify. The scenarios, in essence, were one of lime and another of sand.

From the first game, it is clear that the DragonBall Evolution game was a by-product derived from the movie

I could understand about the game Dragonball Evolution if the developers or those responsible were as little placed in the Dragon Ball universe as the scriptwriter of the film, but it is that behind the Bandai Namco logo we find that of Dimps, who had given life to some of the most powerful installments of Dragon Ball on consoles since the turn of the millennium, including the two Dragon Ball Z Shin Budokai titles for the PSP itself. Luckily they said goodbye to the laptop with a DBZ: Tenkaichi Tag Team. 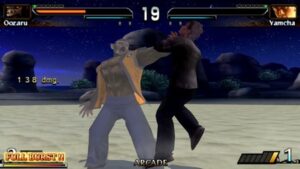 From the very first game, it was really clear that the DragonBall Evolution game was a by-product of the movie. Not that the game was lacking elements or had gone easy. In fact, there was – to a greater or lesser degree – a willingness to offer different experiences to the player. There is even a mission mode that gives a point of variety to the set through 50 challenges.

But, of course, in the end, the game is reduced to being a superficial and soulless vision of a bad adaptation. And that’s not good.