“Gods and Monsters”, one of the games announced last E3 2019 and from the creators of Assassin’s Creed Odyssey, seemed like a peculiar bet.

The trailer showed us wide grassy hills, a somewhat cartoonish aesthetic inspired by Greek mythology, and … little else. Its content was a little mystery because we did not know how it was played or what its mechanics consisted of; just the fact that we would handle Fenyx, a protagonist who had to face the Greek gods to save her universe.

A series of delays, leaks, and studio ins and outs made it seem for a while that the game was struggling or, at the very least, that development had run into unexpected problems. Either way, everything now points to the end game is totally different from what it was going to be at first. And, contrary to what often happens with these situations, it is inevitable to think that the change has been for the better.

Because the first time we tried Immortals: Fenyx Rising – that’s what the game is called now – we came across a simple and concise title, well aware of its limitations, but which makes good use of its capabilities to create a pleasant and full open world. of points of interest and a striking setting. 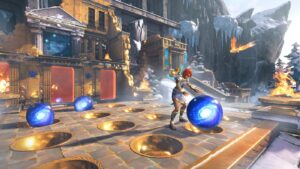 In the section that we have been able to test, our protagonist – in the demo with a predetermined appearance, but that in the final game we can customize – must save her universe by helping the Greek gods to free themselves from the tyranny of Typhoon.

To do this, we will have to explore a map divided into six different areas to solve certain challenges, defeat bosses and various mythological creatures, and solve some puzzles. It’s not that the size of the map is excessive – we were able to cover the area we were allowed to test a couple of times in our three hours of play from end to end – but the traffic over it is very agile and full of secondary activities that they will make us stop more than once on the way to the main missions. Soon we find different types of puzzles, agility, and precision challenges. 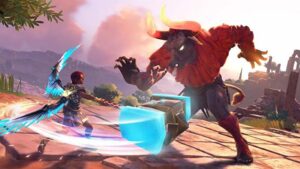 Following the story of the gods – of whom, the truth is, we still don’t know much – is just one of the things we can do, and despite the fact that the plot missions are more elaborate than the rest, sometimes we will find really complex challenges and well thought out hidden in a corner of the map. One of the points of interest, for example, are some puzzles in which we will have to form constellations on the ground, using large blue balls trapped inside different structures and constructions.

Thus, we will use our skills in a creative way to release them; sometimes, we will have to use several of the balls that we have previously unlocked in order to access the following. It takes a while to understand the internal logic of these phases, but when we learn to think in the language of the game itself, they flow in a very logical and very satisfying way.

We also have a kind of dungeon that transport us to the Underworld and that, after overcoming them, will offer us an object that will help us improve our weapons and skills later. The reference is more than obvious: there is a lot of The Legend of Zelda: Breath of The Wild in this title, and sometimes we even find it strange not to hear Link’s characteristic battle cry when we launch into battle. 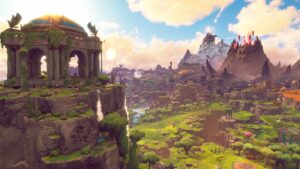 Not that it’s bad: Immortals: Fenyx Rising embraces its references instead of trying to hide them and does not raise any particular novelty a priori, but it does understand perfectly what its strengths should be. Apart from that, the high point of this demo are two separate elements, but although they seem totally different, they combine very well: the combat and the atmosphere.

On the one hand, the battles, in general, and the fights against the bigger bosses, in particular, flow in a very simple and very intuitive way from the beginning. We have a strong attack, a weak attack, a ranged attack, and different special abilities granted by the gods that we activate by holding down the right trigger and, simultaneously, pressing one of the four buttons. Many of these powers of the gods will make us move from the place we are: jump hit down or attract enemies towards us. This means that we can chain them, one after the other, and make visually attractive combinations very simple and pleasant, encouraging us to continue playing. 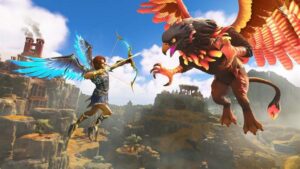 That from the first moment we want, more and more, to test the limitations and possibilities of the game is good news, because one of the most promising aspects for the future is its setting and the way in which it approaches Greek mythology.

When we talk about this pantheon, its associated works, and the various myths associated with the gods, we tend to think of serious stories and lofty references. Which, by the way, doesn’t quite square with the true nature of Greek myths, which are essentially sitcoms and adventure stories, full of tragedies, inside jokes, skirt-tossing, betrayals, and passionate romances. Immortals:

Fenyx Rising, however, tenderly embraces this more colloquial facet of this folklore and does not hesitate to portray it in a cheerful way, with a lot of jokes, Hidden references, and allusions both in their dialogues and in the design of their settings and characters. At no time does it give the feeling that the game wants to be smarter than you, alluding to scenes or situations that you may not know; Instead, she wants to celebrate the setting on which it is based, and manages to make it attractive to both those who are not so well versed in it and to those already in the know.

In fact, the demo we played guided us through the main missions through a dialogue between Zeus and another character; a series of exchanges that happened when we reached a new area, defeated an enemy or unlocked a puzzle.

This conversation, full of winks, comic allusions, and meta-references, set a very concrete and very genuine tone. Our disappointment, yes, came when it was explained to us that this narration was exclusive to the demo and that it would not be available in the final game; a decision that we hope can be reconsidered in the long term.

Despite everything, and especially taking into account the complex development circumstances that are intuited behind this title, the renowned Immortals: Fenyx Rising seems to have very clear ideas, and presents us with an attractive idea that he develops with ease.

It will not be, perhaps, the most ambitious video game that we can count in the Ubisoft catalog, but it has personality and some more than successful references, and there are wickers here to make it a memorable experience.