Hyper Scape is Ubisoft’s new Battle Royale. A game that will be released this summer on PC under a free-to-play model and with the difficult task of standing out in a market dominated by Fortnite, PUBG, or Apex Legends, which are constantly being renewed.

Developed by Ubisoft Montreal, its main difference from the competition will be its verticality, the use of special powers, and integration with Twitch where viewers can modify certain parameters of the game. And how is all this put into practice? Do you have a chance against the rest?

What if Crackdown went to Battle Royale?

Last week we had the opportunity to play this Hyper Scape with other colleagues in the environment and part of the Ubisoft team for three hours. It was a technical demo, still in development, so there is some room for improvement, of course.

First, we witnessed a talk by Graeme Jennings (producer) and Jean-Christophe Guyot (creative director) to put ourselves in the situation, emphasizing the verticality of their urban map, with many high-rise buildings on which we can reach their rooftops.

with relative ease thanks to the double jump and the ability to perform parkour using the ledges. In this sense, the sensations with Crackdown were inevitable. Except we don’t have to collect skill orbs here, although there are other items …

Hyper Scape stands out more clearly from the competition thanks to the use of powers, here called hacks. We can only have two assets at a time and some are somewhat reminiscent of titles like Overwatch or the recent Valiant.

They are skills that can make a difference in times of trouble and that have a cooldown time until their next use.

As Battle Royale that it is, we will start from scratch by jumping into the void at the beginning of the game, having to search inside the buildings or in certain boxes on the roofs for weapons, ammunition, or hacks to equip.

And here’s the good thing: if we find any of these repeated, we can boost the weapon or skill in question up to a maximum of five levels. Recycling with a reward. Well.

The city we will move through is called Neo Arcadia, a futuristic environment that seems to take on certain monuments of Paris, such as the Notre Dame Cathedral (something that does not surprise knowing that it is from Ubisoft), but with the technological advances of living in 2054 Like train lines above houses.

Ironically, 90% of the population lives in poverty, with the Hyper Scape tournament being the fast (or deadly) way to a better life.

Ubisoft made it clear to us that all the characters will have their own story and motivations, knowing more about them throughout each season, despite the fact that in this technical demo that part was blocked.

At the end of the day, we focus on the playable part and witness what it brings to the genre. 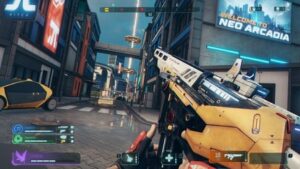 Hyper Scape is not there to revolutionize the Battle Royale, but at least it brings some color thanks to the use of hacks.

As we have said, they are abilities that will go from simple healing to turning us into a giant ball (!?) That can jump to a great height, through creating a protective wall, making us temporarily invisible or spotting the closest enemies.

The squad can only be three people out of a total of 99 players per game and we will have total freedom to decide where to fall when being propelled by our propellant capsules from the air.

The funny thing is that depending on the number of players in the game, or simply so that no two are the same, the map will be modified from the beginning, preventing access to certain regions.

Neo Arcadia, in any case, and as with all Battle Royale, will gradually reduce its size by causing its districts to hurt us if we stay there when they have to be evacuated.

The effect will be quite original, apparently a kind of virus that will “eat” the walls, as if it were a glitch. It can be a bit confusing at first, also if we ignore the indications of the game itself, but by displaying the map it becomes clearer.

It does not mean, however, that both this feature and others have not completely convinced us, such as the fact that we do not show more obvious indicators when we receive damage.

And it is that there were few occasions where we did not even notice that they had shot us with a sniper rifle, being a weapon that kills you with two bullets …

In addition, we have noticed that a balance is necessary with certain weapons that either do little damage or stand out from the rest and are easier to use. Ubisoft is predisposed to readjustments, of course. 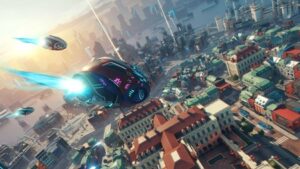 On the other hand, despite Hyper Scape being a very vertical shooter, we were surprised by this emphasis on entering buildings to collect weapons or hacks, in many cases having quite a few plants to go. In addition, to enter these buildings you have to break a kind of glass door.

A detail that resembles the recent Call of Duty: Warzone is the fact that we will be able to revive our comrades who fell in combat, although it will not always be from the same point where they die, in part due to the randomness of the collapse of the scenario as it progresses the match.

In fact, everything begins as a standard Battle Royale (where the squad that remains alive wins), but if the game is prolonged, a final battle is entered in a much smaller space where a surprise factor is added: a crown that will serve to win instantly if we hold less than a minute with it. And it is not easy to achieve it.

And what about the integration with Twitch? Through a series of spectator events, there will be three options for modifying the behavior of the game, such as dramatically reducing gravity.

They will be short-lived events, but they achieve more interaction in the broadcasts. In addition, there will also be an option to invite the squad directly from Twitch.

Ubisoft has just made its technical test on PC official ( through Uplay ) from today (July 2) until next day 7. Its launch is scheduled for this summer on PC, with an equally close release on PS4 and Xbox One. 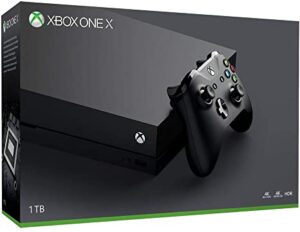 It has little things that we liked, but we have also experienced a certain déjà vu with other songs and we see it difficult for it to compete (for now) with the greatest. We will have to see how it evolves these months on consoles and PC.