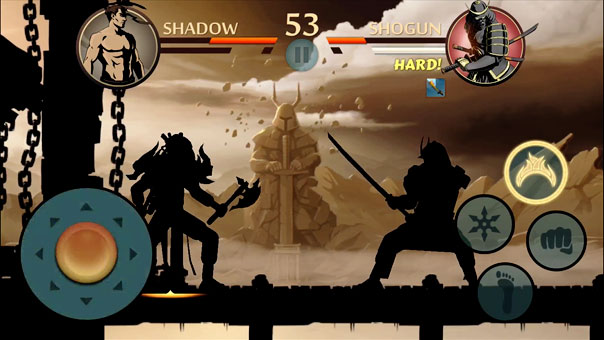 Are you a fan of martial arts and looking for a fun way to hone your skills? Shadow Fight 2 is a thrilling fighting game that combines the best of martial arts, weapons and RPG elements to create a captivating gaming experience. The game is easy to learn but difficult to master, and with the right strategies, tips and tricks, you can become the ultimate shadow fighter! This comprehensive guide will provide you with everything you need to know about the game, from basic to advanced strategies, and even some helpful tips and tricks to help you get the most out of your Shadow Fight 2 experience.

Shadow Fight 2 is a fighting game for mobile devices that features a diverse line-up of characters, a thrilling adventure mode and a robust multiplayer mode. The game’s fighting system is simple to learn but difficult to master, allowing players of all skill levels to enjoy the game. The adventure mode in Shadow Fight 2 takes the player on an epic journey where you must explore different regions in order to level up your skills, weapons and magic until you reach the Gates of Shadows to defeat the most terrifying enemy. The game features a robust multiplayer mode where you can join other players in clan wars. Additionally, the game features a highly customizable fighting system, allowing you to play with unique fighting styles and collect and upgrade a wide range of weapons and equipment.

The most important thing to remember when playing Shadow Fight 2 is that you must have patience. While it’s easy to get caught up in the excitement of the game and to try to rush your way through each level and mission, this isn’t recommended. Instead, it’s best to take your time, be methodical and to strategize your approach to each situation. You can speed things up a bit by equipping appropriate fighting gear, but the best fighters are those who take the time to plan their approach to each opponent and situation. Shadow Fight 2 is a game that requires a combination of both offensive and defensive tactics. While it’s important to be aggressive and to maintain a forward-moving approach to each level, you must also be aware of your surroundings and be prepared to defend yourself when necessary.

Shadow Fight 2 is a game that rewards patience, but it also provides players with the tools they need to speed up the process of leveling up and progressing through the game. The best way to progress through the game as quickly as possible is to take advantage of the following strategies and tactics. – Choose the right fighting equipment and enchantment: While fighting equipment doesn’t have any direct impact on your fighting stats, it does help to boost your energy levels, which is critical when it comes to powering up, healing and earning coins. The higher your energy level, the quicker it will drop. – Use the correct fighting style: In addition to choosing the right equipment, you must also choose the correct fighting style for each situation. Each fighting style has a specific strength and weakness, so it’s important to select the right fighting style when taking on an opponent. – Defeat the Daily Boss: If you’re looking to earn a large amount of coins, you should focus on defeating the Daily Boss. – Engage in Tournaments: If you’re looking to earn a large amount of coins and experience points quickly, you should focus on completing tournaments. – Use Gems wisely: If you’re looking to progress quickly through the game, you should use gems wisely and focus on completing Daily Missions.

One of the most important aspects of Shadow Fight 2 is equipping the right weapons and equipment. While the game allows you to collect and use a wide range of fighting equipment, it’s important to keep in mind that the right equipment can make a big difference when it comes to powering up, earning coins and defeating opponents. As you progress through the game, you’ll unlock a wide range of weapons and fighting equipment. You can equip fighting gear in the shop, or in the middle of a fight by tapping on the fighting gear icon found in the upper left-hand corner of the screen. The fighting equipment that you select has a direct impact on your fighting ability, including your damage output, critical hit rate, critical hit damage, as well as your health, energy and stamina levels. The better the equipment that you equip, the more effective your fighting will be.

Leveling Up Your Character

Shadow Fight 2 features a wide range of boss battles, and as you progress through the game, you’ll come across a number of challenging bosses. While many of these bosses can be defeated with the same strategy, it’s important to keep in mind that each boss is different, and it’s important to select the right fighting gear and fighting style to defeat each boss. You can view a list of upcoming bosses by tapping on the “Bosses” icon found within the main menu. You can also view the progress of upcoming boss battles by tapping on the “Progress” button found within the “Bosses” menu. If you’re looking to defeat a boss in Shadow Fight 2, it’s important to level up as quickly as possible, and to complete as many missions as you can to earn XP. The more XP that you earn, the more quickly you’ll level up and be able to defeat more difficult bosses.

The Shadow World is a parallel world that exists alongside the real world. In this parallel world, you can explore the various areas, fight monsters and complete missions. When you complete missions in the Shadow World, it earns you experience points and coins, which will help you to progress through the game more quickly. While you can play this mode solo, you can also join clans to help you fight the monsters and earn greater points.