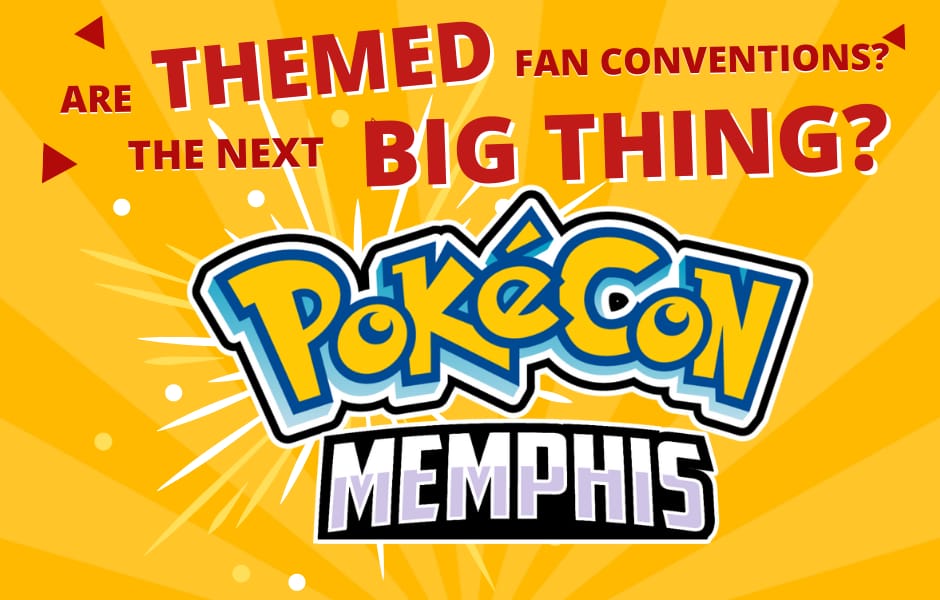 Gaming today is highly competitive and the largest franchises in gaming have huge fan bases. Speaking strictly in financial terms, Pokémon is the largest media franchise of all time! This is why it makes sense that someone would build an event around it’s fan base. Pokémon already has a huge fanbase of gamers, who compete in Video Game and Trading Card Game tournaments. However, those competitions rarely appeal to the more casual gamers or to fans of Pokémon that enjoy other formats, such as comics or the TV show. PokéCon Memphis seeks to fill that gap.

Speaking generally, there has been a huge growth in gaming conventions, but PokéCon Memphis might be the first one that is entirely dedicated to a specific fan base. I would expect to see similar events featuring competitions and other guests pop up in the years to come. However, this event seems to be something of a test for the possibility of themed fan conventions, as opposed to anime or gaming conventions that are broader in scope. The Memphis Music Room is betting that this can work, and I agree. You’ve got a huge fan base to work with. If the collectable market has shown us anything in the last few years, it’s that it’s poised for growth.

So what is PokéCon Memphis doing to fill the gap between anime conventions and dedicated competition? They’re bringing competition and entertainment together. PokéCon Memphis might be an unofficial Pokémon fan convention, but they have attracted talent that is quite official. For example, Veronica Taylor, who played Ash in the first 8 seasons of the anime, will be there to sign autographs for fans. Stuart Zagnit, another Pokémon TV alumni, is doing the same. He played Professor Oak in the original TV show. You know, the one that made the games explode 25 years ago? The characters they played have remained staples in the Pokémon world.

There’s also on-screen and on-stage talent appearing. Jason Paige, who many call “The Voice of a Generation”, will be there performing the Pokémon Theme Song. Former Disney composer and accomplished pianist, Trevor Alan Gomes, is also taking the stage to bring music from the games on piano. So, there you have songs from the anime and songs from the games together on one stage. In more recent years, Pokémon’s live streams of Regional Championships has become popular. One of the commentators they frequently feature, Frosted Caribou, is doing the same for this event. She’s going to be stream casting the competition side of things.

Players of will compete for cash and prizes in their choose of game, either the Sword and Shield Video game or the ever-popular Trading Card Game. The event itself is being held November 18-20, which is actually the release of the next generation of Pokémon Games, specifically Scarlet and Violet. Another content creator, Wes Upchurch of Team Triforce is going to bring us an epic live stream of the new games. In fact, he’ll be playing the game for several days straight during the event to set a New Guinness World Record.

All in all, this event has a bit of everything for the Pokémon fan. Vendors, gaming, and entertainment. For anyone who is a fan of Pokémon, Memphis is going to be the place to be when the new games drop.  For me, it seems to be the start of a new trend, fan expos that bridge the gap between the various media formats that game franchises use to reach their fan bases.