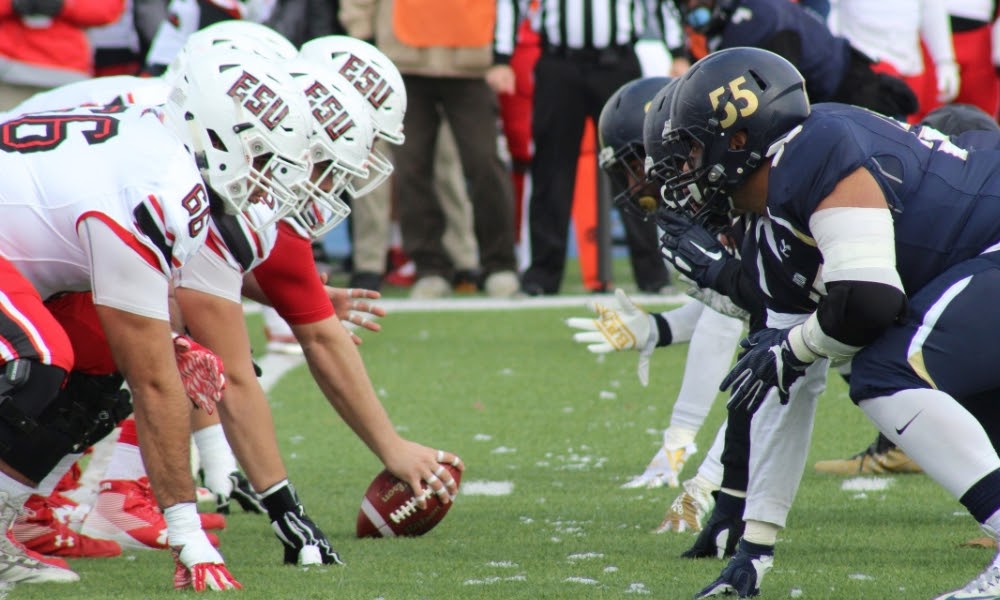 American football was born more than a hundred years ago in the United States derived from English rugby. It is a ball game played by two teams, that is, 11 offensive players play against 11 defensive players. The attacking team tries to carry the ball, either by running or bypassing into the end zone and thus scoring points. The defense has to try to impede the advance of the rival team towards the score.

Depending on whether you carry the ball to the end of the course, or if you simply kick it between the opponent’s clubs, it will trigger a different number of points for your team. The team with the highest score, after 60 minutes of play, wins the match.

An American football with its iconic white dots and brown leather.

The American football ball is an easily recognizable ovoid, it is a rubber chamber inflated from 12 1/2 to 13 1/2 pounds, covered by a layer of leather and its weight is 397 – 425 gr. When the ovoid is thrown, it flies in a spiral and generally revolves around itself.

Touchdown: 6 points – the ball crosses the line into the opponent’s end zone. After a touchdown, the team has the opportunity to try to make an extra point or a 2-point conversion.

Conversion: 2 points – instead of looking for safer “extra points”, the scoring team can attempt to get the ball across the opponent’s end zone one more time, after successfully scoring a 6-point score.

A formation refers to the players positioned in line before the start of a play. There are both offensive and defensive formations and many derivations in both categories.

The I Formation is perhaps the most used formation of attack. It owes its name to the column-shaped like an “i” that make up the  Center,  Quarterback,  Fullback and  Runningback. Its popularity is due to the fact that it is very balanced and allows a wide variety of both passing and running plays. FB and TE can act as receptors or as blockers and is a difficult formation for defenses to interpret.

The  Shotgun is a pass-oriented formation. The  Quarterback is placed further from the  Center and that forces to make a   long snap. The separation between the ball and the offensive line, in addition to the help in blocking the  Tight End and  Runningback, allows the QB much more time to select the pass without being overwhelmed by the defense. In addition, the presence of two WRs in Flanker position, which allows them to launch at speed. The QB has more time to pitch.

It receives the name of Formation  Ace or  Singleback by the presence of a single player in the  Backfield. It is very pass-oriented but with a   fast Runningback that can run East-West, to provide Play Action maneuvers that end in a running game.

Interception or intercepted pass: It is a specialized move that occurs when a quarterback’s pass is caught by a player from the opposing team. This leads to an immediate change of possession during the play: the defender who catches the ball immediately assumes the role of an offensive player and tries to advance the ball into the opponent’s court as far as possible.

Fumble: a play in which the offensive player drops the ball while it is still in play. A loose ball can also be forced by an opposing defensive player, who can snatch or hit the ball carried by the attacker voluntarily or involuntarily with any part of his body and clothing (including the helmet). It can also be recovered by the defense and these advance with it.

A sack occurs when the quarterback is tackled or leaves the field of play behind the line of scrimmage before throwing a forward pass. This occurs if someone on the defensive line, one or some linebackers or defensive backs can quickly outpace the blocking players of the offensive team, the basic protection of the quarterback; or if the team cannot find an eligible receiver in a reasonable time who can catch the ball, allowing the defensive team a greater opportunity to tackle the quarterback.

Offside: Offside is a minor foul in American football caused when a defender crosses the imaginary line of scrimmage before the ball is struck. The penalty associated with the infraction is the advance of the ball 5 yards.

False start:  When an offensive player makes a move or pretends that he will start his start on the play before the snap occurs (delivery of the ball by the center to the quarterback). It is penalized with 5 yards.

Game delay:  It is when the offensive team does not center the ball before the seconds it has to do so are used up (40 or 25 depending on the circumstances of the game). Another reason delay of play is penalized is when a defensive player obstructs the rapid completion of the next play.

Pass interference:  It is a penalty that occurs when a player interferes with the ability of an eligible receiver to try to catch a pass. Passing interference can include tripping the opposing player, pushing, pulling, or crossing in front of her or pulling her arms. It does not include catching or deflecting the ball before it reaches the receiver.