Resident Evil 5 is the 7th work in the series (including those outside the numbering) that has continued since the first work was developed and released by Capcom in 1996.

A bio-action game from a TPS (third person) perspective.
The stage of this work is Africa, which is exposed to the fear of bioterrorism.

Chris, who has obtained information that there is a black trade, tries to secure a trafficker Ricardo with his new partner Sheva, but a battle with the new biological weapon “Ouroboros” is waiting.

The 7th work in the series that has continued since the 1st work was developed and released by Capcom in 1996. (Including outside numbering.)

A bio-action game from a TPS (third person) perspective. Software for PlayStation 3 and XBox.

Throughout the series, grotesque expressions such as physical damage and bloodshed depictions are included, but it is loved worldwide as it is produced in other media (drama CDs, manga, novels, movies).

A live-action movie featuring Milla Jovovich as the main character was also a big hit and was made into a series.

Due to the frequent occurrence of terrorism, the general public is aware of the existence of biological weapons.

Bioterrorism was occurring in the world by terrorists due to the collapse of “Umbrella”, the cause of the raccoon incident.
The Federation of Pharmaceutical Companies has established the anti-bioterrorism unit “BSAA” to suppress the situation.

Ten years after the Western-style building incident, Chris Redfield, who became a member of BSAA, visits the Kijuju Autonomous Region in Africa.

The purpose is to detain Ricardo Irving, a trafficker who trades black biological weapons.
He meets his new buddy Sheva Alomar there, but what comes to Chris’s mind is the tomb of his former buddy Jill Valentine, who is missing.
Jill is said to have died on a mission two years ago, but Chris believed Jill was still alive.

Reynard doesn’t know the location of the trading site and the identity of “Ouroboros”, but he hears something that “changes the balance of the world” and tries to go to the trading site, but the residents attack him.
By the hands of Irving, the inhabitants were contaminated with the biological weapon Praga and turned into a product called “Majini”.

Hiding in a private house and looking through the window, a rally was being held in the plaza.

There is also a figure of Reynard, but it seems that his identity was lost and he was killed.

At that time, the two found are going forward while engaging with Majini.

The bodies of the Alpha Team, who were supposed to join when they arrived at their destination, were found.

The dying Captain Dechant tells him that he has escaped to Irving and that he was a trap.

Upon receiving the HDD data that they had stolen from the enemy, Chris and others transferred the data to the headquarters and followed Irving, who was thought to have headed for the mine. 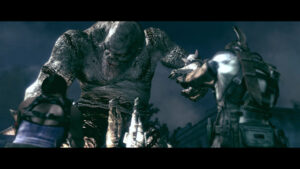 On the way to the mine, he is attacked by a horde of Majini, but is rescued by Kirk, a BSAA member who came to support him with a helicopter.

However, the helicopter crashed after being attacked by flying creatures.

Majini also reappears and faces a desperate pinch, but is saved by the waiting Delta team.

Upon receiving the information contained in the HDD data analyzed by the headquarters, Chris confirmed that there was a missing Jill.

Chris is convinced that Jill is alive.

When I arrived at the mine, I saw Irving.

He tries to restrain him, but misses it due to the guidance of a mysterious masked person.

When I was looking for clues, the map showed that I was heading to the oil field.

However, Irving fired a large biological weapon, the Popocalim, to stop Chris and his friends.

At the end of the battle, Dave of the Delta team appears there.

When I drove to the confluence of the team, I was hit by a new biological weapon “Ndes” and Dave and the Delta team were wiped out.

The team was lost again and the mission was made impossible, but Chris tried to continue alone, leaving Sheva.
Chris really wanted Jill’s information.

However, Sheva did not withdraw as a partner and because the team that was like a family was killed.

Along the way, Chris talks about Jill’s disappearance.
Two years ago, Chris and Jill got information about the whereabouts of Umbrella’s commander, Oswell E. Spencer, who had been hiding for a long time.

Participated in a personal security operation and discovered Spencer’s body upon arrival.
On the side is Wesker, a nemesis who is dying behind the Western-style building incident, and after the confrontation, Jill and Wesker broke the window and fell to the cliff.
Jill died at a later date according to regulations, as the body was found missing, let alone the remains.

Upon arriving at the oilfield, the two reunited with Josh, the captain of the Delta team, who was believed to be dead.
Josh fainted during the battle and apparently woke up here.

Then, the elevator doors close and a large number of Majini rush in.
In fact, Irving was a decoy trap for Josh to get rid of Chris.

After escaping from the trap, Josh split into two to secure a retreat and Chris and his friends to chase Irving.

Irving was the director of this oil field.
The oil field is about to be depleted, exploding it to cover it up and eradicate Chris, smashing the Praga eggs received from a mysterious masked person, and turning them into monsters.

After the battle, he left the answer in the cave and melted and disappeared. 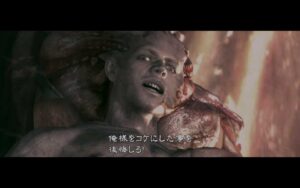 At that time, a woman called Excella and her nemesis Wesker were talking at a research facility.
Excella was the female president of TrySail, one of the federations of pharmaceutical companies that organized the BSAA.

A mysterious masked person appeared there and left the room with Excella.
A number of missiles with the words “UROBOROS” lined up in front of Wesker’s line of sight.

As Chris and his friends went through the cave, there were ruins with many traps.
After releasing the trap, there was a flower field. The flower was the base of the virus that Umbrella was developing.
Looking at the PC at the research facility next to it, it turns out that Tricell took over Umbrella’s research and created the Ouroboros virus.

Leaving Jill and chasing Wesker to the ship, Exera, who was betrayed by Wesker and turned into Ouroboros, appears, but is repelled by a satellite attack.

The scene changed, and Wesker remembered the incident two years ago.
Oswell E. Spencer is the founder of Umbrella and the mastermind behind various past events.
The reason Wesker sought out Spencer was to hear his true purpose.

Spencer’s purpose was to build hundreds of Weskers with excellent genes to be worshiped as God.
However, most of them died when the virus was administered, and only Albert Wesker survived.
After listening to everything, Wesker’s right hand pierced Spencer’s chest.

Wesker was trying to launch a missile containing the virus to replace Spencer, who had spread the Ouroboros virus around the world and killed him, to become a god.
Jill joins Josh and escapes.
To prevent Wesker, it was necessary to overdose the drugs that he was taking on a regular basis.

As for the drug, Sheva had obtained Wesker’s drug “PG67 / AW” that Excella had.
In the final battle with Wesker, he hit a rocket launcher, but Wesker easily stopped it with his bare hands.
Chris shot a gun there and gave him medicine.
Wesker, who was fatally injured, boarded the bomber, but two people also boarded.
I opened the hatch and managed to release Wesker to the outside, but the bomber also fell into the crater of the volcano.

Wesker is still alive, tampering with the missile, turning it into Ouroboros, and attacking them.
A helicopter appears in the sky there. Jill and Josh came to help with a helicopter.
They used the rocket launcher on board to finish off and win.

If it is off, it will penetrate without hitting even if it attacks an ally.

When on, the attack hits allies (except for some weapons, the damage is 0) and does not hit the enemy.
(If the physique hits an ally, it will not damage it, but it will frighten or blow away. Also, the knife and stun rod will do the same.) 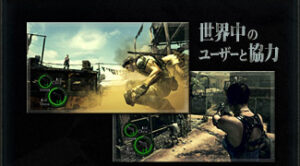 Except for the extra edition, this work is the first in the series to be equipped with COOP mode.
You can enjoy COOP play with your friends and people all over the world at any time in the entire game.