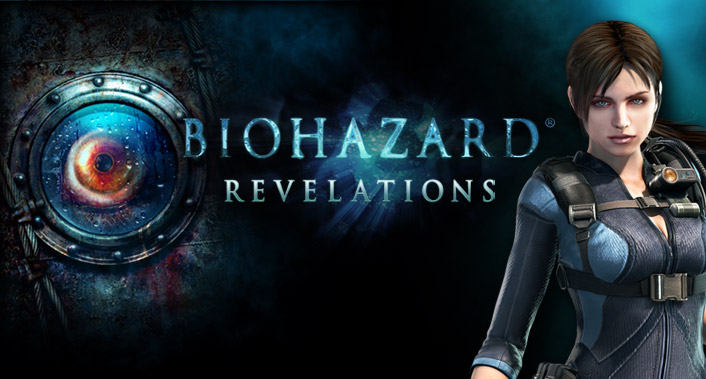 “Resident Evil Revelations” is a horror action game released by Capcom on January 26, 2012. This work is an incident that occurred between “Resident Evil 4” and “Resident Evil 5”, and is positioned as a Gaiden.

In order to rescue Chris Redfield, who disappeared during the investigation, Jill Valentine infiltrates the luxury liner “Queen Zenobia” drifting over the Mediterranean Sea, where he is involved in a new conspiracy.

“Resident Evil Revelations Unveiled Edition” with higher resolution and all download contents was released on PS3, XBOX360, WiiU, and PC.

In the series where the action elements are getting stronger year by year, this work is made with the theme of “return to origin”.

Therefore, it is full of gimmicks and horror effects that will satisfy fans of the past, and you can search and solve mysteries using the touch screen, which is unique to 3DS.

In addition, the story is in chapter format, and a movie with narration of each character is played at the beginning and end of the chapter.

You can experience it as if you were watching a drama.

The film begins with Jill Valentine infiltrating a luxury liner, Queen Zenobia, drifting over the Mediterranean Sea to rescue Chris Redfield, who disappeared during the investigation.

In addition, the content of the book of Dante Alighieri, a politician and poet, is quoted, and there is an expression that some of the favorite characters talk with themselves about the problems that arise between terrorism and politics.

Jill Valentine and Parker Luciani, members of the BSAA anti-bioterrorist organization, have landed on the luxury liner “Queen Zenobia” drifting in the Mediterranean Sea.

The aim is to search for BSAA members Chris Redfield and Jessica Sherawat, who allegedly disappeared in Queen Zenobia.

The inside of the ship is terribly desolate, and the mysterious biological weapon “Ouse” attacks Jill and Parker.

While rejecting Ooze, he discovers Chris trapped in a small room, which is a doll similar to Chris.

Then, they find the flag of the terrorist organization “Vertoro” that set up bioterrorism in an artificial city called “Terra Grigia”.

The next moment, hypnotic gas is sprinkled into the room, and they realize that the information that Chris and others are on the ship is a trap, but the two are drowsy.

Then, when I heard the words “Welcome to the truth, Jill Valentine …” from an approaching mysterious person, I fell asleep.

At that time, the missing Chris and Jessica were in the snowy mountains.
The two were just unable to communicate due to the weather and were searching for Vertolo’s hideout as planned.

Upon arriving at Valkoinen Mocchi Airport through the coal mine, you will discover the hideout with the Vertolo flag.
Then, when the BSAA headquarters was contacted because the communication was restored, it was announced that Jill’s communication was lost this time.

Chris and Jessica set out for the Queen Zenobia to help Jill and his friends.

Waking up in the Queen Zenobia cabin, Jill joins the stray Parker and begins a search on board to find clues to Chris and the means of communication with BSAA headquarters.

Along the way, he meets Raymond Vester, a member of the bioterrorist organization FBC, but soon disappears.
Raymond was a junior when Parker belonged to FBC, and was also a companion who survived the “Terra Grigia Panic” together.

Terragrisia Panic is a biohazard caused by the spraying of viruses and the introduction of biological weapons by Vertoro, who opposed the development of the maritime city of Terragrisia.・ Solis ”heat rays destroyed Terra Grigia and resolved it.

After that, Jill and his colleagues learn in the communication control room that Vertolo’s purpose is to spread a new virus called “t-Abyss” on board the sea and cause bioterrorism again.

Then, when he managed to restore the ship’s communication function and communicate with the headquarters, Chris and his friends were heading for their help, and FBC’s Morgan used Legia Solis, who destroyed Terragrisia, this time in Vertolo. It is told that he is trying to destroy the hideout Queen Zenobia.

The two succeed in shifting the standard of Legia Solis by using the chaff grenade of the plane left on the ship, but the next moment, the ship tilts and begins to sink.

After passing through the casino to escape, a Vertolo member who attacked Jill and Parker appears and tells them the truth of the incident.

The moment a Vertolo member opens his mouth to speak, he is shot by Jessica who arrives.
Parker rushed to his side and removed the gas mask he was wearing, and the person was Raymond.

And when he tells Parker that Jessica is a traitor, he dies.

At that time, the four people realized that the ship was tilted greatly and there was little time left, and they split into two hands, Jill and Chris, Parker and Jessica, and started to act.

Jill and Chris succeed in neutralizing t-Abyss in a huge incubator with an anti-vaccine at the ship’s research facility to prevent the leakage of t-Abyss.

Meanwhile, Parker was asking Jessica about the facts that Raymond had told him.

Raymond, who was thought to be dead, appears there and points his gun at Jessica as well, but Jessica, who has a momentary gap, shoots and Parker, who holds Raymond, is injured.

Parker then leaves himself and tells Raymond to chase after Jessica, who pushes the ship’s detonator and escapes.

Jill and his friends also hear an alarm, and when they start escaping, they discover an injured Parker on the way.
When traveling with an injured hoodie, the road collapses and the hoodie is about to fall.

Jill grabs Parker’s hand, but if he doesn’t want to be clinging to his feet, Parker releases himself and falls.
Remorsefully moving forward with Parker and boarding the helicopter that arrived over the ship, a giant biological weapon appears, but it is repelled by the rocket launcher and escapes successfully.

From inside the helicopter, he communicates with the BSAA headquarters and asks O’Brien, the representative, for details of the incident.

In fact, Terragrisia Panic was Morgan’s self-made performance, and Morgan, who wanted t-Abyss research data, colluded with Vertolo to cause a biohazard.

Then, the ship was biohazardized and the unnecessary Vertoro was destroyed.
The incident was a trap for O’Brien to work with Raymond to disguise and lure Vertolo’s resurrection to gain evidence that Morgan was a mastermind.

Jill and Chris head for the sunken ship when they hear from O’Brien that the definitive proof is in the sunken “Queen Deed” in Terragrisia.

Upon invasion, he discovers Vertolo leader Jack Norman.
Norman was immortalized by administering t-Abyss to himself, seized data on secret meetings with Morgan, vowed only to take revenge, and lived on the ocean floor.

However, when his consciousness is fainted and he misunderstands that they are Morgan, he further administers t-Abyss and attacks him as a monster.

After defeating Norman and sending secret meeting data to O’Brien, Morgan is finally arrested.
The FBC was effectively disbanded, most of its functions and talent were integrated into the BSAA, and the BSAA was reorganized as a state-controlled anti-bioterrorist organization.

Parker escaped safely with the help of Raymond and returned to the scene after a month of medical treatment.

O’Brien resigned himself as a representative and became a BSAA adviser, writing detective novels at home.

And Jessica has also escaped, and Raymond comes to the place where she is reading a book at the cafe.

Raymond gives Jessica a sample of the t-Abyss he has obtained and leaves, saying “Please report.”

The two were members of an organization targeting t-Abyss, acting to make BSAA think they were enemies.

Jill and Chris went to Spencer’s residence to arrest Spencer, a former umbrella executive.
And the story continues to “Resident Evil 5”.