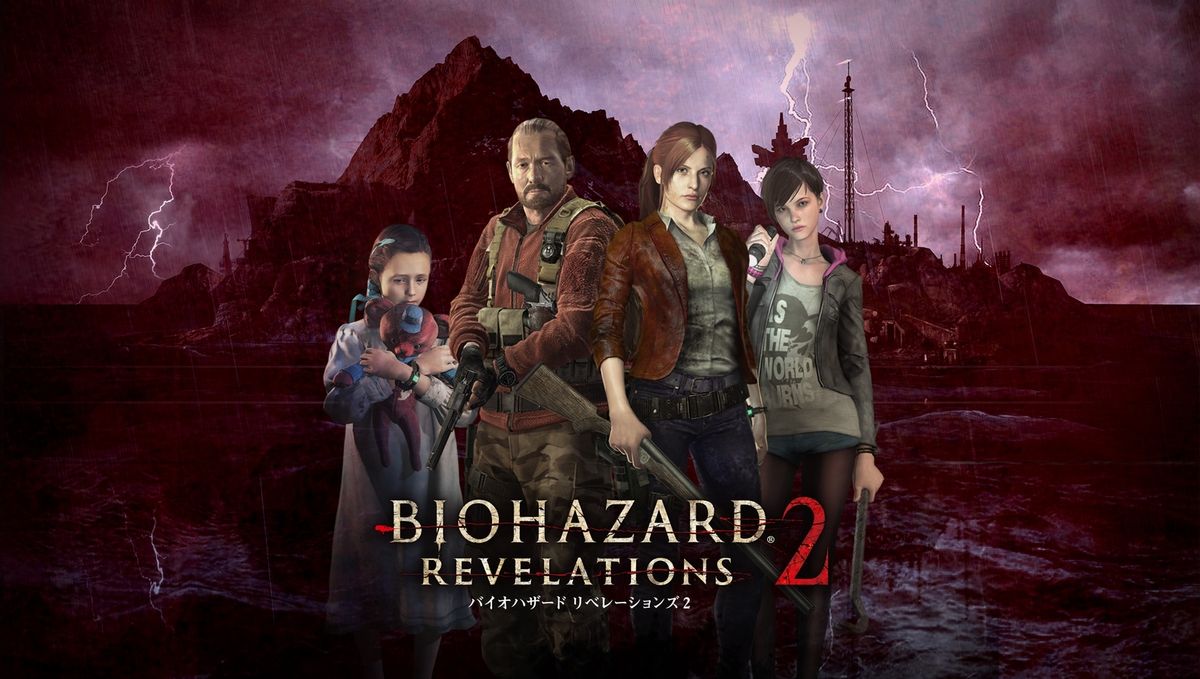 “Resident Evil Revelations 2” is a survival horror game released by Capcom on March 19, 2015.

“Resident Evil Revelations 2” is a survival horror game released by Capcom on March 19, 2015 for PlayStation4, PlayStation3, Xbox One, Xbox360, and Windows.

Although the time series is connected to the previous work, Resident Evil Revelations, the story side is not connected and is independent, so there is no problem starting from this work.

As with the previous work, a digest and a notice of the next chapter will be played for each chapter.
Also, since this work has multi-ending, there are good end and bat end.

Prior to the package version, this work adopted a method of distributing all four chapter episodes online in four weeks.

The main characters are Claire Redfield and Barry Burton, who will play Claire and Barry separately for each chapter.

Claire’s story is about Claire, who was imprisoned in a camp on an isolated island on suspicion of being a spy, and escaped from the isolated island with Barry’s daughter Moira.

Barry’s story tells the story of Barry, who came to rescue Moira, and Natalia, a mysterious girl she met shortly after her arrival, searched for Moira.

In story mode, you can switch between your partner (Moira, Natalia) and the operating character, and you can benefit from the character-specific actions.

In addition, you can acquire skills that are useful to players by acquiring BP with rubies and other jewels that can be picked up along the way and exchanging them for BP. 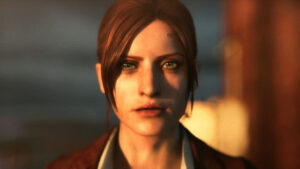 Claire Redfield, a survivor of the Raccoon incident, was a member of the NGO “Tera Save”, which aims to rescue victims of bioterrorism, and traveled around the world.

One day, Claire attends a party held at headquarters.

There was Moira Burton, a new employee and friend.
Suddenly, a mysterious special forces rushes in when Claire and Moira are chatting.

The detained Claires were imprisoned in a camp on an isolated island, and Claire’s arms awoke with a mysterious bracelet that changed color when feared.

When he escapes from the camp while rejecting the biological weapon “Africted” that attacks indiscriminately when he finds a living human without ego and reason, a voice is heard from the bracelet and a mysterious person who calls himself Obercia (watcher) “Go to Vosek, everything starts there,” he says unilaterally.

Although they are confused, they decide to aim for Vosek, a bar in a fishing village.

On the way, he found the communication tower and Moira tried to communicate with tears, but there was no response.

Claire stares at the ocean and finds out that the place she was brought to is an isolated island in the sea.

Barry Burton survived the Western-style building incident and is now an advisor to the BSAA, a special forces specializing in bioterrorism using biological weapons.

Upon arriving, he meets Natalia Corda, a mysterious girl who says she was on an isolated island.

Barry begins a search for Moira with Natalia, telling Natalia to wait on the ship, but not wanting to be alone.

Along the way, it turns out that Natalia has a special ability to see the signs of ghosts. As I proceeded with the support of Natalia, I arrived at the communication tower.

A message from Moira was left in the communication tower, but the date was half a year ago.

When Natalia hears Moira’s name, she suddenly holds her head and begins to suffer, telling Barry that “Moira is dead.”

Claire and his friends arrive at Vosek, a bar in the fishing village, where they reunite with their fellow Terrasaves, Gabriel Chavez, Gave and Pedro Fernandez.

While exploring the village, he found a broken helicopter, left it to Gave to repair it, and was attacked by a large number of Africted.

When you are fighting, you will receive a communication from Oversia, and if you already feel fear, it will mutate to africted. The t-Phobos virus is being administered to your body, and when the fear you feel reaches the highest value, the bracelet Shines red and is told that it will develop.

Then, Pedro who can not bear the fear surrounded by africted develops and attacks.

They managed to escape and remembered the information that Pedro had said before the onset that Obercia was originating from a tall tower that was not blocked by radio waves, and the two decided to aim for the tower in the center of the island.

On the way, he meets Natalia, who was wandering alone, and acts together.

When three people are heading to the tower, Gave, who succeeded in repairing the helicopter, flies overhead, but Obersia remotely breaks down the helicopter and crashes and dies.

And while Claire and Moira are distracted by the helicopter, Natalia is taken away by someone.

Barry decides to head for the tower when he hears that he was with Moira on the way from Natalia to the tower.

When Barry arrives at the tower, he finds a photo of Albert Wesker, the mastermind of the Western-style building, and a woman in the tower.

Natalia, who saw the picture, tells me that the woman’s name is Alex Wesker.

In front of Barry, who can’t hide his surprise from the same name as Wesker he knows, a mysterious person with a respiratory system suddenly appears, staring at Natalia and telling him, “I was waiting for you.”

The two who lost sight of Natalia proceed while searching.

When I managed to reach the tower, I found Neil Fisher, a fellow of Terra Save, in front of the elevator.

And Neil was a former FBC executive of an anti-bioterrorist organization that broke up at Biohazard Revelations (which was disbanded because the founder caused bioterrorism), and it was dramatic when it was adapted to the Uroboros virus to revive the FBC. It turns out that he wanted to rule the world with fear using a virus that could evolve into, and cooperated with Obersia to send Claire and his friends to an isolated island as a donation.

However, Neil, who has been used up by Obercia, is struck by the Ouroboros virus, becomes a monster, and attacks Claire and others.

I managed to defeat him and board the elevator, but Claire was about to be killed by Neil, who was still alive.
Moira couldn’t hold the gun because of her past trauma (playing with a gun when she was little and hitting her sister), but when she saw Claire who was about to be killed, she overcame the trauma and used the gun that Claire dropped. Succeeded in defeating Neil.

When a mysterious person removes his respiratory organs and shows an eerie face, Natalia tells him that the person in front of him is Alex Wesker.
When Barry asks Alex about Moira’s whereabouts, he says, “Everyone is dead and only Natalia is left,” and calls Africted to surround him and attack.

Natalia’s wit escapes and searches for Alex to relieve Moira’s remorse, but Alex suddenly appears again and knocks Barry away.

Then, Natalia’s neck was tightened, but for some reason she suddenly became frightened and ran away.

Claire and his friends take the elevator to Obercia on the top floor of the tower.

Various things can be found from the materials left in the laboratory on the top floor.

Obercia was Alex Wesker, the sister of Albert Wesker, who caused the Western-style building incident.
Alex, who is ill and has a short lifespan, was studying to transplant his personality to another person and reincarnate.

As a result, it was found that only humans who overcame fear could become a new body vessel, and experiments were conducted using humans on the island and humans on Terra Save.

Alex was reincarnated and was plotting to create a new world where fear would rule people.

Natalia, who lost her feelings of fear after experiencing the bioterrorism “Terragrisia Panic” caused by an organization called Vertolo in the maritime city of Terragrisia, was selected as Alex’s new vessel and treated before Claire and others came. I was given a sleep for half a year.

Claire and his friends finally confront Alex, but Alex says “the experiment was successful” and commits suicide with a gun.
If you are confused for no reason, the tower’s blast system will operate and begin to collapse.

When desperately running away, rubble falls toward Claire, and Moira, who is in a hurry, becomes an underlay, but Claire puts Moira, who tells her to leave herself and run away, and escapes alone.

While Claire, who survived safely, was being taken to the intensive care unit of the hospital, Barry asked her about the safety of Moira, but Claire could only apologize to Barry while her consciousness was stunned.

Barry, who was fainted, wakes up and confirms Natalia’s safety, and the two follow Alex who has escaped.

Alex was still alive because he was afraid when he committed suicide, and the t-Phobos he was taking developed and became a ghost.

And, as Alex, he hates Natalia, who has not been awakened yet, as a fake and is trying to kill him.

When Barry and his colleagues arrive at Alex’s lab, they encounter Alex administering the Ouroboros virus to himself.

Alex, who has become Ouroboros, attacks them, Barry is thrown away, and Natalia is squeezed by Alex and falls into a pinch.

Moira with a gun appears there, shoots Alex down and rescues Natalia.

Moira lived a survival life after the tower collapsed.

With the guidance of Moira, he escapes from the spot and goes outside, but Alex who has evolved further and lost his ego is approaching.

Then, Claire on a helicopter appears this time and fights back.

At the end, Barry attracts Alex, and Moira and Claire finally succeed in defeating Alex by shooting a rocket launcher from a helicopter.