“Monster Hunter: World” (MHW) is the fifth title in the “Monster Hunter” series released by Capcom Co., Ltd. The story is that the player heads for a survey of the new continent as a member of the 5th survey team.

The game system so far has been completely redesigned so that you can enjoy hunting with a high degree of freedom.

“Monster Hunter: World” is a game software for PlayStation 4 / Xbox One / PC released on January 26, 2018. Only PlayStation 4 version is sold in Japan.

This is the fifth work in the series (except for the full version called “G”). In addition, it is the work since Monster Hunter 3 as a work exclusively for stationary machines.

With the evolution of game hardware, the game system has been redesigned.
The field has become a seamless open field from the conventional area system.

In the conventional multiplayer system, 1 to 4 people gathered and started the quest at the same time, but from “Monster Hunter: World” it is possible to participate in the middle of the quest. 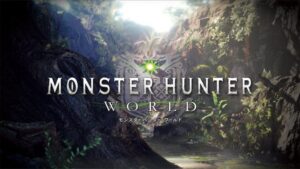 The stage of this scenario will be unfolded in “New Continent”, a continent different from the old continent where the regions of the previous series are located.

The New World was an unknown land until now, but as a result of research and information compilation within the Old World, it became clear that the old dragons born and raised in the Old World are heading for the New World.

An old dragon is a powerful monster that is comparable to a natural disaster. In “Monster Hunter 3 Ultimate”, the appearance of the ancient dragon Navardeus in the waters near Moga Village first issued an evacuation advisory to the residents of Moga Village to abandon the village and evacuate. An ancient dragon is a creature that is recognized as “not a human being to stand up to” so that evacuation is recommended first rather than repulsion or hunting.

The Hunters Guild of the Old World has formed the New World Old Dragon Survey Team and has dispatched survey teams to the New World several times in order to elucidate the phenomenon of “old dragon migration” in which the old dragons head for the new continent approximately every 10 years. ..

As a member of the 5th Survey Team, the player will head to the survey of the new continent while tracking the ancient dragon Zora Magdalaos who will be migrating this time. 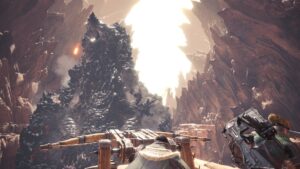 Players dispatched as members of the 5th Survey Team will proceed with the survey of the new continent centered on the survey base Astera.

Among them, the 5th Survey Team discovers traces of Zora Magdalaos, which has been missing since it was encountered on the voyage from the Old World to the New World.

A fort is built on a large cliff called the Great Canyon, and the capture operation of Zora Magdalaos is finally carried out.

But it’s not all bad.
Zora Magdalaos, who boasts a huge body that can be mistaken for a single mountain, has crossed the canyon and the terrain has changed, so a new road has been created and it is now possible to go beyond the canyon.

Beyond the canyon, there is the 3rd Survey Team, whose whereabouts were unknown (survival could be confirmed by signal, but could not come and go) with the airship left for the investigation of the canyon. , Pave the way to contact them.

Players head to the Land Coral Plateau, where the Third Survey Team is located, for further investigation and pursuit of Zora Magdalaos. 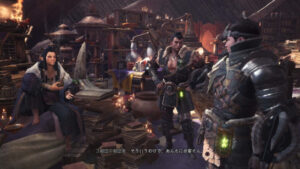 Players who have successfully joined the leader of the 3rd Survey Team will be asked why they cannot return to the Survey Base while having the means of an airship.

I was told that flying monsters were in the way and that the flying system was damaged by the impact of the crash, and in order to solve them, I hunt the wind drifting dragon Reigiena and the floating dragon Paoulum.

In it, he discovers the traces of Zora Magdalaos, who has disappeared and disappeared beyond the canyon. Apparently, Zora Magdalaos was heading to the bottom of this land coral plateau, a land called Miasma Valley.

In the first place, what kind of place is this land coral plateau and the valley of Miasma at the bottom? The old woman who is the hunter of the 1st group explains it to the player.

As a result of research, this land coral plateau has been found to be a land formed by rooting various plants (such as coral called land coral) on the carcasses of creatures with enormous energy.
The “certain creatures” were creatures that were comparable to natural disasters, that is, ancient dragons.

While explaining that, the old woman who is the hunter of the 1st group suddenly looks at the sky. At the point where I pointed out, “Look, life will fall,” the coral eggs released by the land coral fell down on the wind. 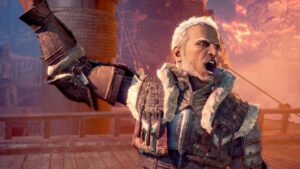 Zora Magdalaos is heading to the Valley of Miasma to head to the Dead Land. However, one problem arises here.

According to a survey by the leader who was investigating the ley line, it is almost certain that the death of Zora Magdalaos in the valley of the air will affect the ley line, resulting in a volcanic eruption.

Thus, an operation to guide Zora Magdalaos heading to the dead land to another place instead of the Miasma Valley will be started.

The strategy is to build a fort in the cave “Ley Line Corridor” with a ley line, attack Zora Magdalaos from there, and make them understand that “If you go further, you will be attacked” and change the course.

The destination of the course to be changed was the sea. In the ocean, he thought that some of the heat energy of Zora Magdalaos would be offset, the impact on the ley line would be small, and the eruption of the volcano could be prevented.

Zora Magdalaos, who returned his heels, disappeared as if sinking into the sea. 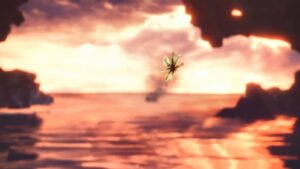 Did Zora Magdalaos really die in the sea? Or are you planning to head to the Ley Line Corridor in the depths of the Miasma Valley just by retreating?

In front of the research team who tried to investigate them, new monsters that have not been encountered in the research of the new continent so far will appear. 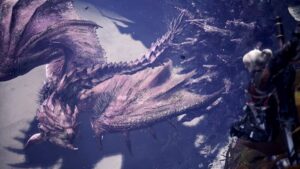 Apparently, these phenomena can be seen due to the fact that Zora Magdalaos made an “old dragon migration” from the old continent to the new continent, and that some terrain of the new continent changed due to capture operations and diversion operations. It seems that it has become.

Starting with the appearance of the Rio Leia subspecies, which was confirmed to exist only in the old continent and was not considered to be in the new continent, the Rioreus subspecies and Diablos subspecies have been confirmed, and will accompany Zora Magdalaos. The appearing Nergigante is now witnessed alone, and a new species of flying dragon, Baselgius, is also appearing.

As we proceed with these investigations, it becomes clear that even three types of ancient dragons, Theo Tescatl, Kushaldaora, and Valhazak, have moved to the new continent by “old dragon migration.”

The investigation team and the players have decided to respond to the abnormal situation in which not only Nergigante but also three more types of old dragons are confirmed, which are comparable to natural disasters.

And, as a result of the investigation, in addition to Nergigante, it will be possible to find out why three kinds of ancient dragons have appeared in the new continent.

From the movement route etc., it is expected that the three types of ancient dragons are also “to end their lives”, so in order to investigate the ley line corridor that will be the destination and what is around it, the player At the back of the ley line corridor, you will step into a place called “Dragon Crystal Land”.

The innermost part of the land of dragon crystals

As a result of the player’s investigation in the land of the dragon crystal, the existence of unknown energy is found deeper in the “convergence of the earth vein”.
Apparently, the old dragons are heading for this energy, and it was speculated that the “old dragon migration” might also be the reason. 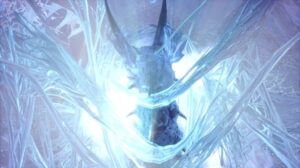 To confirm this, the player heads to the converging point of the terrestrial vein with the leader of the research team and the hunter of the dragon people (a race with outstanding skill and knowledge) who belong to the first group.

What appeared in front of the line that reached the convergence point was a mass of dragon crystals created over many years by dragon crystals, which are said to be the solidification of the energy “old dragon’s bioenergy” flowing through the ground vein. there were. 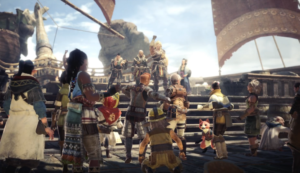 An incident occurred immediately after the investigation was started and the dragon hunter picked up the dragon crystal that had fallen to the ground.

Seeing the birth of an unidentified creature, the Grandmaster decided that it would be extremely dangerous if this creature went out, and the player persuaded him to do something about it.