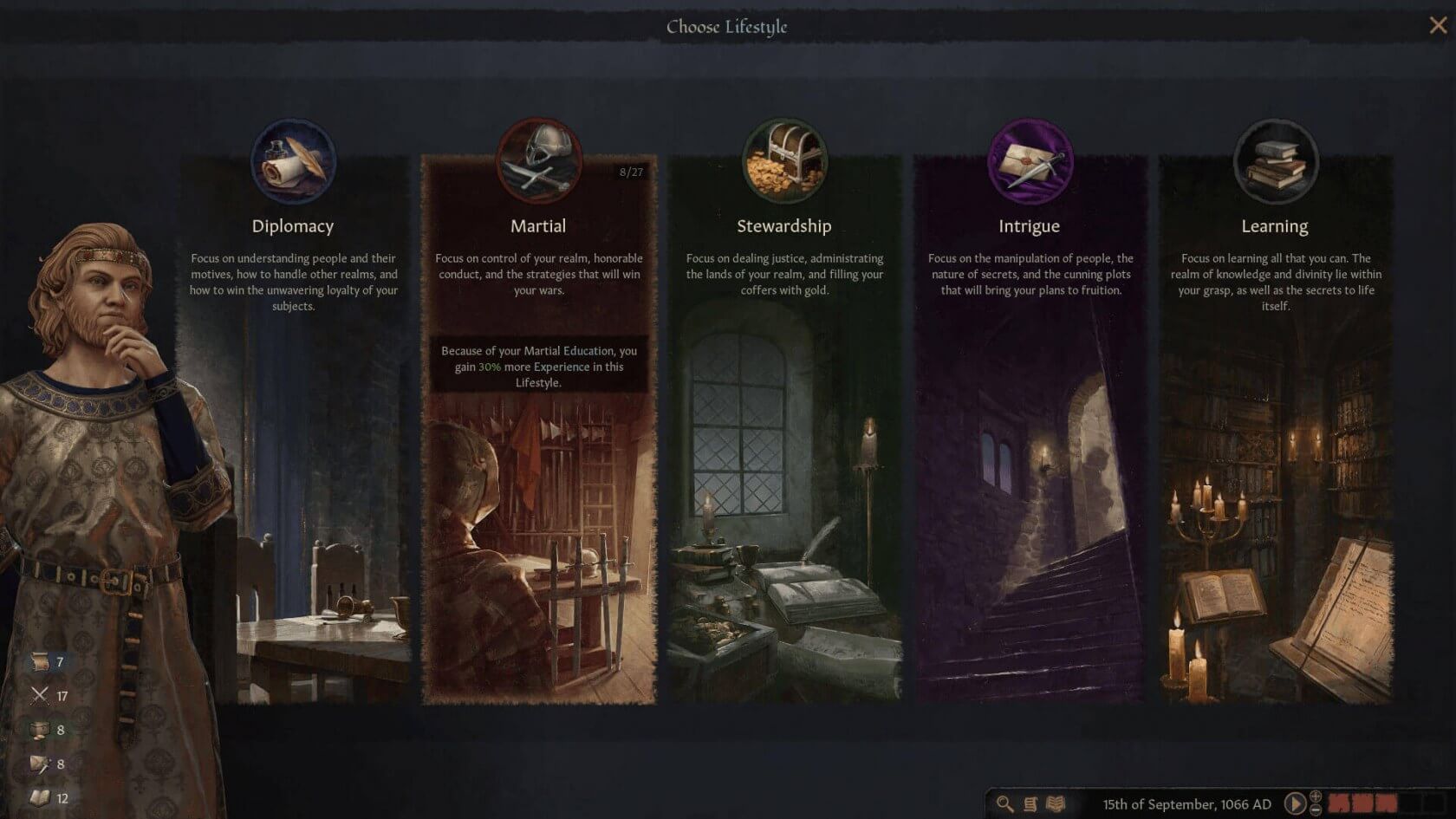 The game, like its predecessors Crusader Kings and Crusader Kings II, is a grand strategy game and dynasty simulator set in the Middle Ages and will run from the Viking Age to the Fall of Byzantium. Unlike its predecessor, at launch, it only has two start dates: 867 and 1066. Dynasties can form cadet branches that have their own heads and act mostly independently from their parent dynasty. The heads of dynasties will be able to use a new resource known as Renown to assert their control over their house. For example, the heads of dynasties are responsible for legitimizing bastards.

Characters have full-body, 3D-rendered character models instead of 2D portraits. As in Crusader Kings II, they have traits that affect their stats and behavior. Taking choices that go against a character’s traits will increase that character’s stress. The game’s genetics system allows characters to pass on some of their characteristics to their descendants. Characters are able to frighten their vassals into staying loyal by increasing their Dread, which increases when the character performs malevolent actions, such as executing or torturing other characters. Characters are able to select one of five lifestyles to follow. Each lifestyle has three skill trees that allow characters to enhance skills related to that lifestyle. 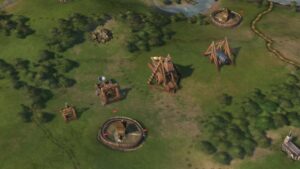 All religions and almost all government types are playable, though Merchant republics and theocracies were not playable at launch. Most leaders in the game adhere to the feudal, tribal, or clan government types. Nomads are portrayed as tribal instead of having their own government type. Religions have Tenets, which are bonuses given to all practitioners of that faith, and Doctrines, which deal with the church’s stances towards issues like homosexuality and female clergy. Players will be able to develop their own heresies, with the Tenets and Doctrines being chosen by the player. The more a heresy deviates from its original faith, the more Piety it will cost to create it.

The map is about four times more detailed than the previous one and slightly larger. Holdings are depicted directly on the map, meaning armies will need to move around the map to siege each sub-holding within a county, which is a change from previous renditions. The average number of holdings per county is about three. Some of these holdings will start out undeveloped (though they will still have an “owner”) and can be built in later.

Levies are represented primarily by low-quality peasant infantry. Characters will need to hire men-at-arms in order to field higher-quality soldiers, such as crossbowmen and cavalry. Characters can make other characters from their court or realm with significant combat skills into knights, which are extremely powerful; 20 knights are roughly equal to 200 peasant levies.

Game director Henrik Fåhraeus commented that the development of the game commenced “about 1 year before Imperator“, indicating a starting time of 2015. Describing the current game engine of Crusader Kings II as cobbled and “held together with tape”, he also stated that the new game would feature an updated engine (i.e. Clausewitz Engine + Jomini-toolset) with more power to run new features.

As is the case with many of Paradox’s unreleased works, the developers publish a weekly developer diary. Each post focuses on a single aspect of the game, such as government types, user interface, governments, war, etc. and how this aspect of the game will be handled in Crusader Kings III, and how it is different from Crusader Kings II. A monthly update video is also published on the Paradox Interactive YouTube channel, summarising all of the changes which have been made in that month’s Dev Diaries. 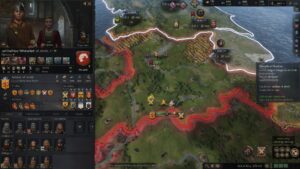 The game is available in two editions: the Base Game Edition, which includes the base game and a pre-order bonus, and the Royal Edition, which includes the base game and an expansion pass. The expansion pass contains a collection of flavor packs and the first content pack. The game was released on 1 September 2020 and is available through Steam and Xbox Game Pass for PC. Crusader Kings III was initially rejected by the Australian Classification Board, reportedly over complications regarding the game’s classification. The game was eventually cleared and released within Australia six days after its initial release, on 7 September. Because of its delayed release, the pre-order bonus window was exclusively extended to 21 September for Australian Steam users.