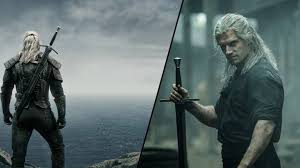 Be honest, how many of you have played the entire The Witcher saga? I have no doubt that most of you will have dedicated dozens of hours to the third installment, and some of you even to the second. But to tell the truth, I have found very few people who have finished first of all. And I can understand why. Upon revisiting it in 2020, one realizes that there are many things that are not so easy to digest anymore. 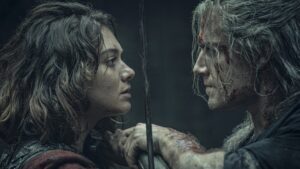 You couldn’t ask for more from a 2007 game developed by a then little unknown Polish studio. Those who played it in its day found a quite different and very solid approach to medieval fantasy role that satisfied them, and they have remembered it fondly ever since.

The problem is that video games have this tendency to pursue the technology race so fervently that they sabotage themselves, creating new standards that, in the eyes of companies, make old ones obsolete in a matter of a few years. 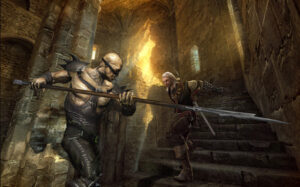 Most people have met Geralt of Rivia thanks to The Witcher 3 (or the Netflix series ), and by digging deeper and deeper into his adventures they will have come across the first part of video games. A title that in comparison to its sequels is rough, uncomfortable, ugly, and is hideously written.

Again, it is a product of its own time and context. If we take that into account beforehand, we can see that there is actually quite a bit of charm in it. Enough virtues that become reasons to demand a new reinterpretation.

Clarify that, from the outset, I’m not a big fan of remakes. Or rather, I do not usually like the basic concept that we often have of the remake in video games: the graphic update without more, which tries to be a substitute for the original work as if the art expired due to technological obsolescence. Remakes like those of Crash Bandicoot, Shadow of the Colossus, or The Legend of Zelda: Link’s Awakening, although they are very enjoyable, do not convince me because they are practically identical to the originals, and these were already quite good. His merit is in knowing how to copy and make the classics invisible.

Another rooster crowns when we talk about Resident Evil 2, for example, which is presented as a radically different title from 1998, but without losing an iota of its essence. It brings something new and respects that the original is still a valid game, with its own identity. The Witcher needs something of the style. Bringing the beginning of history (of video games, not books) to that audience that, until now, have had no choice but to read summaries on wikis to better understand what happens in the second and third installments. 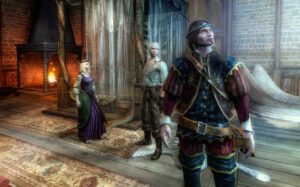 Everyone is lazy to play something that is 13 years old, but it is proven that when it is presented to us in the form of a modern update, we are all running for it. If the remake is also sufficiently unique and different, we may get bitten by trying the original to see what made it so special in its day. Nothing is going to stop the first The Witcher from still selling at a bargain price on Steam, after all.

What needs to be reinvented

A new approach to some of the less fortunate aspects, now that the studios have more references, experience, and resources, would be appreciated. When thinking of CD Projekt’s debut feature, we all come to mind that a combat system that was inspired by that of classic ARPGs like the Diablo saga. Its main differentiating element, at least in execution, was a meager combo system that only served to camouflage the fact that it really only consisted of clicking on the enemy. The grace was elsewhere, of course. The previous preparation based on potions and the build that we carried out for Geralt was more important.

In general, the fights were solvent and allowed to be played, but it was not that they managed to convey very well the emotion of being a monster hunter sorcerer. Although the system of The Witcher 3 is not the panacea, it has shown that the most strategic part of alchemy can be combined quite well with the dodges, blocks, and cuts. A future remake of the first would not have to follow this path specifically, but it would not hurt to focus on that action from moment to moment; the game of reflexes that have given us such good choreography in the series, for example. Anything that involves more than just clicking.

With the plot and the narrative, three-quarters of the same happen. The story was fine, but seeing any of its scenes in 2020 is insufferable. I reiterate that the studio cannot be blamed for poor performance or little talent. Back then, the resources to create characters whose faces and animations were more than just outright hieratic simply weren’t within reach. The dialogues, terrible all of them, were probably the product of a poor translation from the original Polish.

They were especially hurtful in the sex scenes, with phrases so ridiculous that they caused real embarrassment in whoever was playing, ruining any hint of eroticism that was tried to achieve. That is another: we are in 2020 so that ridiculousness of Geralt buzzing all the ladies he could, with hardly any context, and collecting them in the form of cards as if they were Pokémon (if you have not played it, this is true) has to remain in the past. It was shabby, in bad taste, and it brought nothing more than a stupid wanker fantasy.

All in all, there are a ton of things The Witcher did phenomenally. Touring the city of Vizima is a delight, and its environments and characters were bursting with vitality for such a modest 2007 game. A pity that, because of the structure and design of the missions, we ended up so fed up with it. Much of the game, at least in the main plot, consisted of traversing the city from cover to cover doing missions without much interest. The tedium that made it too difficult to continue giving the title a chance, why are we going to fool ourselves. 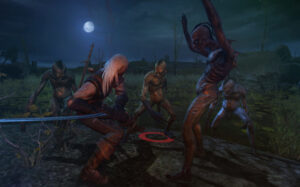 The remake could rethink what we have to do in each of the game’s acts, leaving us free to explore the world beyond the city at any time. It doesn’t have to be The Witcher 3 at the extension level in that sense or adopt a purely open-world structure, but it would be a good way to bring a better pace to the adventure, make it more varied and let the player face the challenges that they are presented to you from new perspectives.

And yes, it would also come in handy if it wasn’t plagued by bugs, which have the ability to crash the game and ruin a game at any time. When I talk about ruining I really mean it: I’ve had to start the whole story over again on occasion because it wouldn’t let me move forward. If you already need a certain exercise of willpower to get into The Witcher, an unfortunate bug can completely end that.

Focus on the good, which is not little

It could be like that for a handful more paragraphs, but I think you’ve gotten the idea. Personally, I think that the virtues of a remake are not only in the possibility of bringing an old or out-of-print work closer to more people but also in knowing how to highlight what made it great in its day and reimagine it for the new times. I know that I am contradicting myself here because I have only talked about the aspects that should be improved, but I insist that the first installment was a great game, and it is well worth reliving.

The way in which the decision making was raised was great because of how credible it was, staying very true to the spirit of the books. On the other hand, the use of Slavic folklore gave rise to fascinating mythology and that supposed a breath of fresh air before the very trite fantasy with elves and dwarves of Tolkien (especially in chapter 4). 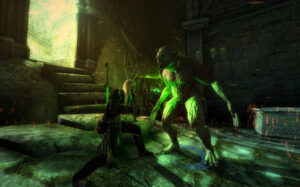 The sequels have veered more towards the latter and towards plots with political intrigue, which in fact are part of The Witcher’s DNA in a way, but that marked identity is missed, the abundance of those mysterious and fascinating creatures that they taught us a little more about the cultural origins of the work.

Now one thing is clear. If there is a remake, CD Projekt is not going to be the one to do it. On several occasions, they have said that they prefer to focus on developing new games rather than going back to the ones they have already made. An understandable position, of course, but that prevents us from enjoying the game that started it all with a tribute to the height, at least until further notice. It is quite unlikely to happen, but many of us would love it.