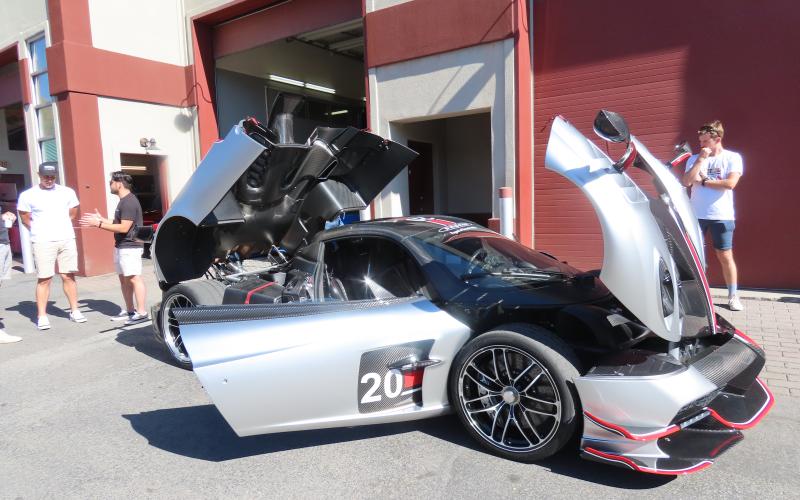 STORY AND PHOTOS BY KAREN BOSSICK

But at a time so many 21-year-olds are testing out the latest electronic gizmos, he was itching to hit the highway with his 2021 McClaren, which cost about $200,000, to see how fast it could go.

“It has 620 horsepower, which is unbelievably fast,” he said.

Levine, who works for Motion Products Inc in Salt Lake City, got his chance Saturday when the fifth  annual Sun Valley Tour de Force took to the highway north of Ketchum to give 48 drivers an opportunity to see how fast they could drive a 3.5 mile stretch of straightaway.

“I’ve been coming to this event as a spectator for a couple years, and I can’t believe I finally get to be in it,” said Levine of the event for which drivers sign up a half-year in advance. “I’m a little nervous but so excited.”

Cars zoomed down Phantom Hill, the beauty of the Boulder Mountains a blur. And, when it was over, Rolf Hirschmann had pushed his 2020 Ferrari Tributo 221.67 miles per hour.

He didn’t break the record, which was 253.01 miles an hour set in 2019 in a Bugatti. But that didn’t erase the thrill for the drivers or for the spectators who biked or hiked up the Harriman Trail to take in the action.

The evening before hundreds of spectators had swarmed into Sun Valley’s Festival Meadows to check out dozens of supercars and classic cars.

“Orange is the most vibrant color—the one that stands out best in black and white pictures on a race track so that’s what we went with,” said Nolan Gray, a spokesperson for McLaren Automotive, a British luxury automotive manufacturer known for its supercars.

The car features carbon fibre lightweight architecture in pursuit of lightness and a high-performance hybrid power train. It gets 11 miles in the EV lane, contains 671 horse power and can reach speeds of 205 miles per hour, going from 0 to 60 miles per hour in three seconds.

While Gray showed off the McLaren, Peter Bush wax eloquent about a Pagani Italian hypercar boasting Italian everything except for its German motor.

“This is one of the most expensive vehicles on the planet,” said Bush, a car shower producer and race car driver who divides his time between Connecticut and hosts the Tour de Force.

“They only made 20 so if you see one of these out and about you know you probably won’t see another.”

Funds raised from the three-day event will go to The Hunger Coalition, which addresses food insecurity in the Wood River Valley. Last year’s Tour de Force raised $175,000 for The Hunger Coalition—enough for 5,500 grocery carts stocking the Healthy Food Pantry for four months.

How to Get WoW Classic Gold

Rise Of The IGaming Industry