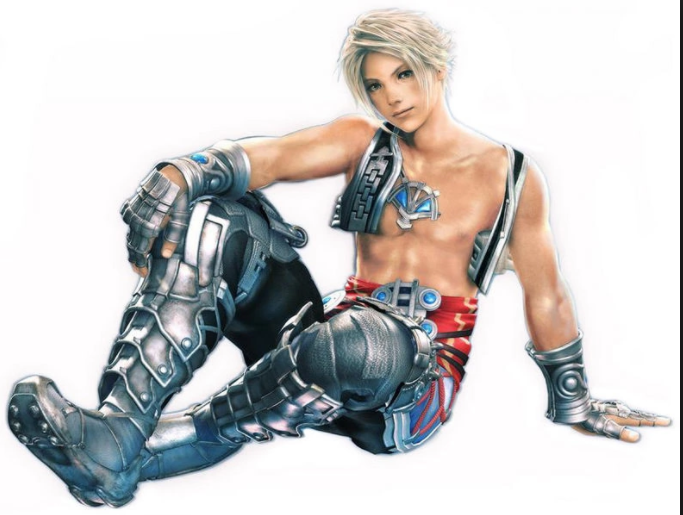 FINAL FANTASY XII (FF12) is the 12th work of the FF series released in 2006. Van, a boy living in downtown Dalmasca, is caught up in a big fate that shakes the world as he sneaks into the royal palace to blow a bubble to the empire that controls his country. In one history of Ivalice, each of the characters that appear has an impressive line.

FFTA2 is set in another land several years after FF12, and characters and monsters that appeared in FF12 will appear.

In this world called Ivalice, two major powers, the Arcadia Empire and its hostile Rosalia Empire, were at war.

The Kingdom of Dalmasca between the two will be under the occupation of the Alcadia Empire.
Van, who wants to become a client state and be released from the cramped kingdom of Dalmasca, who hangs his head on the empire, has a dream of becoming an air pirate seeking “freedom” in order to escape from the feeling of obstruction. 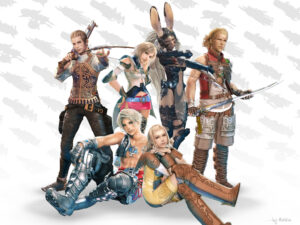 The older brother who believed in you wasn’t wrong

The full text says, “It’s not your fault. The bad thing is the empire. The brother who believed in you wasn’t wrong.”

In a scene where he apologizes for killing Van’s brother Rex in the assassination of King Dalmasca, Van said to General Bash of Dalmasca.

The beginning of Rex’s involvement in the incident was the plot of the Arcadia Empire.
Information on the assassination of the king by the empire is disseminated, and Bash, the general of Dalmasca, is attracted and captured, and another person disguised as Bash assassinates the king. “Dalmasca’s general Bash betrayed the country and killed the king,” he said.

And as a witness, Rex who happened to be there was used. Rex was turned into a dead man by using magic and medicine to take the testimony that “Bash killed the king.” Van, the only relative, has become a vegetative human being who does not respond when he comes to visit him.

Van first became a witness to the assassination of the King and believed that Bash was responsible for the abandonment of his brother, who was tortured to take testimony.
However, while escaping from prison to the Balheim Underpass, Bash himself informed him of the truth of the incident, and Van was surprised and confused, but he changed his misunderstanding when he saw Bash’s attitude along the way.

And Van didn’t blame Bash for feeling responsible and apologizing for involving Rex.

The answer is what to do with my future. I think you can find it if you go with Ashe

The full text says,
“I hate the empire, I’ll revenge it-I’m just swelling with grudges-but
there’s nothing beyond that. I can’t do anything anyway. I noticed that it became empty. Every time I remembered my brother- .
I, I wanted to kind of forget, for the time being or “I want to be in the air pirates.” – do I wonder was saying that the economic good
from the brother of death -. I wanted to run away
also came up here for Ashe, because I want to run away I’m sure
But I’ll stop . I ‘ll stop running.

I want to find a goal . The answer is what to do with my future . I think I’ll find it if I go with

Ashe . ” Van told Ashe in the land of Garif. Feelings.

Van’s dream, “I want to be an air pirate,” was a way to escape from the feeling of obstruction trapped in the past.

That is also reflected in the muffled scenes when asked “What do you want to do after all?” In various event scenes during the work.

We will stop such a kind of escapism, overcome the past, and live as hard as we can now. This is the scene at the moment when I decided to do that.

Like Ashe, it is a heavy word because it is Van who lost a loved one in the war.
We can see the determination to abandon the grudge against the empire and find a goal to move forward.

Van’s line to Ashe, who was surrounded by Imperial soldiers in the Garam-sized waterway.

The line itself was “Jump down!”, But the voice actor’s acting and tongue were bad, so I heard “Oiyoiyo”.

This is also the story of Mr. Kouhei Takeda himself, and he mentions this line in the release promotion video of “Final Fantasy XII The Zodiac Age”.

By the way, “FINAL FANTASY XII The Zodiac Age” had a new recording of some voices, but this line has not been newly recorded.
However, due to the change in the sound source, the voice became clearer, and I could hear it as much as “Toioiro”.

On the top floor of the Riddleana Lighthouse, Van’s line answers a question to Ashe who has abandoned his power for revenge.
It provides the final answer to the issue of “vengeance,” which is the core of the entire FF12 story.

The full text is as follows.

Van
“No. Nothing changes. My brother’s resentment doesn’t clear up. No more! ”

At first, Ashe said,” Revenge on the empire for those who died. ”
As a force for that revenge, he sought the “Tenyo Cocoon” on the top floor of the Riddleana Lighthouse.

It has very strong characteristics. The absorbed energy is stored and can be released at once. As a result, the small country of Nabdis has become a barren land.
It was Arche’s ambition to cut out a new demon stone from the cocoon that had the powerful power to destroy one such country, and use it as a weapon to destroy the empire.
But I was wondering if that was really the right thing to do.

I was skeptical that it was the same as Van who said “I want to be an air pirate” in a kind of escapism.

Eventually, Ashe decides to abandon the “God-given Devil Stone,” a force that can destroy the empire. He concludes that power does not change the past, that the hearts of people who are not in the world do not change, and that revenge does not change anything.

At the cathedral of Bruomi Chase, the head temple of the Kirtian religion, Van uttered an audience with the monk Anastasis, who was standing and closing his eyes and continuing to meditate.

Van is said not to read the air, but this line is one of those mistakes.
Not only is it bad, but this unreadable air can be an unexpected breakthrough.

I didn’t have to be strong. I came with you and I’m going with you

Van’s line in the aerial fortress Bahamut, the land of the final battle.

Fran “The PLA is fighting well, we can’t go wrong.”
Van “Okay, we win and Ashe is the Queen.”
Pannero “Queen … but it looks like it’s going to be hard.”
Bash “at that time, air pirates turn of you want to increase the name kidnapped the Queen,”

“would show banged fled on their own if Arche” Barufurea
“Do you think a strong up there?” Ashe
van “Tatte without separately strongly is, to come together, we’re going together ”

that came out in the flow that.

Van, who is said to be an inconspicuous supporting character in the FF12 scenario, occasionally utters a stunning “hero-like” line.

Van says he will support and move forward in response to Balflair’s recommendation to escape.
This contrast is also one of the answers to the theme “past” in FF12.
Balflare has a stance of escaping from the past, but Van has a stance of accepting the past and confronting it.
This kind of dialogue contrast is created because of the difference in attitude. 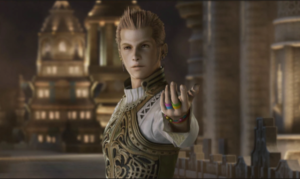 The main character of this story

Balflare’s answer when Van asked Balflare “Who are you?” In the early stages of FF12.

A line that is also a distant cause that Van is said to be inconspicuous in the scenario of FF12.
Balflare, who points to himself and says “the main character” every time, has a lot of flashy event scenes and is very conspicuous.
Van, on the other hand, was a breakthrough at key points, but he did not play a flashy turn and tended to be buried.

For this reason, the answer “Balflare” to the player’s question “Who is the main character of FF12?” Has come to be used as both a story and a truth.

Officially, Van, Balflair, Fran, Bash, Ashe, and Pannero were all the main characters, and the stance was that there were no supporting characters, but the result was unintended.

This line has tended to dislike the players, but the original meaning is that it seems to be annoying that he is the one who came to steal the treasure of the Dalmasca Royal Palace and caused a thief.

Dialogue from Balflair on the light cruiser Shiva.
When asked why one of the air pirates was so enthusiastic about it, and whether it was a principle that was not involved in trouble, he replied:

In the event scene where this line came out, the issue is the “God-given Devil Stone”, which is a treasure of the Dalmasca Royal Palace.
In search of this “godly destructive stone,” Vane, the consul of the Alcadia Empire, invaded and ruled the Kingdom of Dalmasca.

The event scene, in which the information about the Divine Right of Kings is from Dr. Sid, who is studying it, suggests a huge conspiracy in the shadow of the nation.

Of course, the mystery that Balflare wants to reveal is Dr. Sid.
This conspiracy by Vain and Sid over the “God-giving Devil Stone” is one of the focal points of the story of FF12.