“FINAL FANTASY XII Revenant Wing” (FF12RW) is a Nintendo DS game software released by Square Enix in 2007. A derivative work of “Final Fantasy XII” (FF12).
In this work as a portable game machine, it has become a role-playing game (RPG) that can be easily played using a touch pen.
Set in the floating continent Lemures, it depicts a new adventure of Van, the main character of “FF12”.

The platform is the Nintendo DS, a handheld game console.
It is equipped with a system that uses a stylus that takes advantage of the characteristics of hardware.
The system is significantly different from “FF12”, incorporating elements of the simulation game, and many summoned beasts that are the key to this work participate in the battle.
The development staff of “FF12” hardly participated, and the development is outsourced to Think & Feel, which developed the Game Boy Advance software “Monster Summoner”.

The story is one year after “FF12”.
Van, who became an air pirate, travels to the mysterious floating continent Lemures with Pannero and his friends, triggered by a hidden treasure that he accidentally obtained.
The winged clan Eguru lived there.
Forsanos, the god of the Egur tribe, has long resented all those in the earthly world who locked himself in the floating continent of Lemures, and was planning to take revenge.
Vans and their friends confront Forsanos. 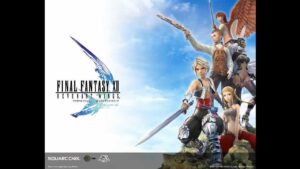 Various races live in Ivalice, the world where FF12 and FF12RW are set.
There are the following races in the clan that mainly live in the general society.

The so-called human Hum tribe, which has the widest range of activities and the largest population in Ivalice.
The Viera tribe is slender and tall, with rabbit-like ears and a tail.
Like Hum, the Moogle tribe is well integrated into society and has a high ability as an engineer.
The Banga tribe, which looks like a lizard and is further divided according to the color of the skin.
The Seek tribe, who looks like a pig and is not very intelligent, has a livelihood of mercenaries and bandits.
N Mou tribe who looks like a dog and is mild.

There seem to be unknown races on the unknown continents of the Ivalice world.

The “Judge of the Wings” that appears in this work has nothing to do with the Judge of the Empire that appears in FF12.
Judges are commander-class soldiers of the Alcadia Empire.
Since it looks like the armor worn by the judges, it has come to be called the “wing judge” by the sky pirates.

The immortal race Ocuria that ruled the Ivalice world with absolute power that appeared in FF12.
Mist is a natural energy that exists everywhere in this world, and they made “Tenyo cocoons” with enormous mist power, and cut out magic stones from them to rule the world.
In FF12, the “Tenyo Cocoon” was destroyed by the vans, and mist overflowed into the world.
Ocuria does not appear directly in this work, but it is involved in the basis of the story.
It is said that Ocuria, who was like a god who ruled the Ivalice world in ancient times, was forced into Lemures after fighting against the evolved Eguru tribe of civilization.
It can be said that all the origins in FF12RW were in this action of Ocuria.

A floating continent floating above the world Ivalice, which was the stage of FF12.
It consists of four large continents and many islands.
Protected by a powerful mist barrier and cutting off all relationships with the outside world, its existence itself became a legend and was only talked about among the air pirates.
When the mist was released due to the destruction of the “Tenyo Cocoon” that occurred in the previous work, a part of the barrier of Lemures was damaged and it became possible to enter and exit.
After that, it became a favorite adventure destination for the air pirates.

A winged race that lives in Lemures.
Originally Hum, he gained wings through the mystery of Viera and became the current Eguru tribe.
Ocuria, the god of Ivalice, feared that they had developed into a civilization that had airships with floating stones that were in Lemures, and contained them together with Lemures.
The trapped Egur tribes eventually began to contend with each other, and Egur’s chieftain, Forsanos, seized the “heart” with the power of the Holy Stone and eliminated the conflict.
The Egur tribe has lost their “heart”, is lonely with emotional ups and downs, and has no dreams or hopes.
Moreover, they have a short life expectancy of about 40 years.

A year after the battle between the Empire and the PLA, the Kingdom of Dalmasca was working to rebuild under Princess Ashe.

Van and Pannero, who live in Ravanasta, the kingdom of Dalmasca, formed a group of sky pirates with a 10-year-old boy, Kite, and an 11-year-old girl, Philo.

At one point, Van, at the invitation of his former companion Balflair, travels with Pannero on his airship to an archeological site in the Belvenia region, where he obtains the treasure of Grebados. However, as soon as he got the treasure, the ruins collapsed, and he was caught in a landslide and Van’s airship fell to the bottom of the valley and was wrecked.

The vans who lost the airship were sent to Ravanasta on the Balflare airship Strahl, and Balflare departed again.
Van loses an airship and is depressed.

At that time, a huge airship crash landed on Ravanasta from nowhere.
The airship was huge, about the size of a small town.
Van and his friends from the Air Pirates immediately enter the expedition on an airship that looks like no one is on board.
Van wanted to own this airship in place of the lost airship.
Then, Van’s treasure of Grebados reacts and the airship begins to move.
Van named the airship Bay Rouge.
Bay Rouge self-driving to the floating continent Lemures.

Lemures is an unknown floating continent consisting of several large islands and the small islands that surround them, floating far above Ivalice, and because it was protected by a powerful mist barrier, it has never been discovered by the outside world. There was.
However, when the “Tenyo Cocoon” in the previous work was destroyed, a large amount of mist was released and a part of the barrier of Lemures was damaged, so it became possible to invade and it became a good target for air pirates. It was.

While traveling to Lemures on an airship, Vans rescue a young man with wings attacked by air pirates.

A young man with red wings and hair is called Ludo and is said to be an Eguru tribe.
The Eguru tribe has long lived in Lemures.
For some reason, Ludo who helped was expressionless and lacking in emotion.
The sky pirates attacking Ludo were summoning monsters from a sacred stone.
They used the monster to troll the surrounding airspace.
Vans and Ludo will defeat the air pirates who are ruining Lemures.

Vans hear that a mysterious person named “Wing Judge” is handing “Sacred Stone” to the sky pirates while defeating the attacking sky pirates.

The “Judge of the Wings” who appeared in front of the vans wore the same armor as the judge of the previous work.
The “Wing Judge” urges the Vans to help collect the Saint Quartz, but when he refuses, the “Wing Judge” shows the Vans some footage.
The footage showed the Balflares fighting and collapsing.

The vans fight against the “wing judge” while thinking about Balflare’s body, but they are not settled.
The “wing judge” broke some of the floating stones that floated Lemures and left.

There are three “sacred stones” in Lemures.
The mist leaking from the “sacred stone” produces “sacred stone” and “floating stone”.
A “holy stone” is a stone that can be contracted with a summoned beast by asking for a stone and can summon a “phantom beast” through summoning gates scattered throughout Lemures.

“Floating stone” is a stone that has the power to float the continent. The mist leaking from the floating stones forms the ecology of Lemures.