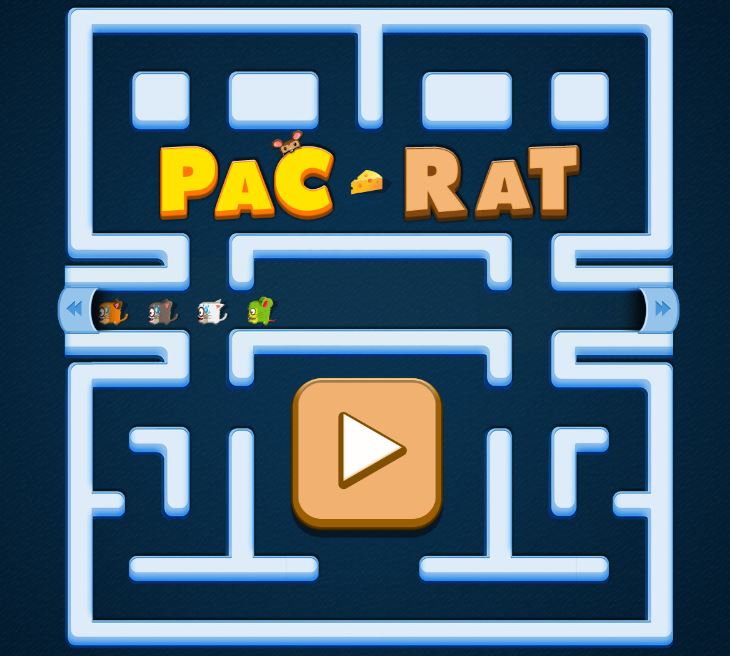 You can now have the fun and social experience of playing the classic Pac-Man game right in the comfort of your own home.

Pac Rat from Plays.org is a modern and playful remake of Pac-Man, keeping all of the addictive gameplay and edge of your seat thrills while adding modern designs.

You’re a hungry and courageous rat who’s trapped in a maze with dastardly cats who only want one thing: to eat you! Thankfully you can outsmart them in the maze and wiggle your way around to find the many slices of cheese hidden around. Once you’ve powered up with some delicious cheese, you can go on the offensive and take out the cats who are after you.

The levels start fairly easy with a bit of challenge. Before you know it you’ll be deep into the game and the hours will have flown by, just like it was in the arcade era.

Pac Rat earned a four-and-a-half star rating from its many online players, who gave it four stars on its design, four-and-a-half on its fun and replayability, and two stars for its difficulty.

Fans have said they love how it’s inspired by Pac-Man and the arcade games they played growing up but enjoyed the modern touches and accessibility.

Pac Rat is played right in your browser so you can play it anywhere, which is what makes it so great during the pandemic. It’s truly accessible and convenient in these increasingly inconvenient times.

Online games like Pac Rat have shown to be a great way to keep your social lifelines open and remain connected to the world during the ongoing COVID-19 pandemic.

“You can really just sign up on your smartphone, or similar device, and see a lot of benefits,” University of Saskatchewan computer science professor Regan Mandryk said in an interview.

Mandryk said online games such as Pac Rat and others that are more geared towards cooperative online play can help lessen feelings of loneliness and social isolation since it’s more than just talking to someone over a video chat service such as Zoom.

By playing Pac Rat, earning high scores, and sharing it with your friends, you’re engaging in a fun and competitive way which is no longer an option when stuck indoors.

An article from the BBC went so far as to say online games such as Pac Rat are social lifelines.

“In this age of long-haul distancing and mental-health strains...the explosive growth of gaming during the pandemic has shown that many have found a new outlet for much-needed connection in isolation.”

Pac Rat, which was recently published and gaining new players every day, is an ideal way to keep your mind sharp during the pandemic and keep yourself connected to your gamer friends.

The FUT 21 TOTY Has Revealed!