The analysis of Mortal Shell places us in front of a game with a strong inspiration in Dark Souls. However, it adds its own elements that make it unique in its kind, and that helps to understand its complexity. In this analysis, we tell you everything.

Welcome, traveler. I guess at this point, you’ll be exhausted from the worlds created by FromSoftware in the Dark Souls series, right? Well, in case it’s not like that and you’re looking for something new, but reminiscent of the games that started this genre, you better welcome Mortal Shell; before he attacks first. 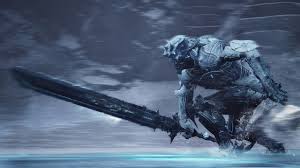 But first of all, what exactly is Mortal Shell? This is the debut in the gaming industry of Cold Symmetry, an independent studio founded in 2017 by just four people. Although in these three years until the launch of the game, it has been nurtured by veterans in AAA titles with a great passion for making games with their own personality.

Little by little, thanks to these new inclusions, the number of people working on the game grew, reaching a total of 15. Yes, Mortal Shell has been created by a dozen minds willing to give a new touch to this type of game, and, certainly, they have managed to be inspired and at the same time have something very innovative.

With these premises, a game was born that is more than an ode to Dark Souls. Although it shares a desolate and extremely cruel world with the FromSoftware saga, with a fantastic medieval setting, the game hides much more, ready to give a touch of elegance and death, although it remains somewhat vague in history.

Waking up from lethargy?

Already in the early stages of the game, Mortal Shell presents us with a unique mechanic. Our character (this time there is no editor, he is a “naked” hero) is capable of hardening himself. Broadly speaking, this mechanic translates into the hero’s ability to transform into stone, thus resisting enemy attacks. Something that is essential, considering that in this world everything will want to end us. 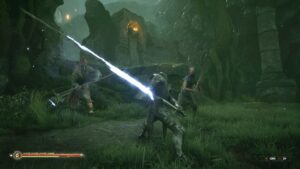 This is what the name of the game, Mortal Shell, refers to, as the premise is to occupy these  Receptacles and use them to advance. The ones you can find are scattered throughout Fallgrim the game world and the place where the opening bars take place, but what happens if they eliminate us from the game?

The world, boy, watch out for the world

In Mortal Shell, being weakened does not mean “dying.” After taking our first steps and dispatching the first enemies, one of the paths leads us to a pantheon where one of the  Genessa Sisters awaits. She will be our “spirit guide,” so to speak, and will help us improve our Vessel; incidentally, it also has the role of a bonfire – speaking in Dark Souls – since we can return to it in case of death.

If our health reaches zero we will be expelled from the Receptacle, but nothing happens, we can return to it once more. The next time we die it is over and we will return to Sister Genessa, (here the main difference is that we do not have to look for our corpse to recover souls, but we will keep what we have achieved). This NPC offers us a mask, of unlimited use and that will serve to return with it in case of need; but in doing so,  we will lose all of our inventory. 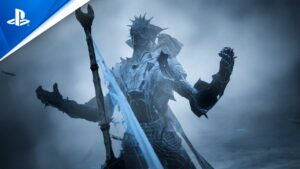 Well, the pantheon is a pillar to understand the gameplay of the world and our role. In the graves, there will be revelations of those who have passed away, and some of them will lead us to new Receptacles. Anyone we find will be stored in inventory. And now that we mention it, the familiarity system should be highlighted: the more we use an object, the more we will know about it and therefore the better we will use it. It is an original way of simulating the level increase.

You will know little more about the world from here since on the top floor of this room there will be an entity, from which you will get the Imbued Seal and will ask you to get the sacred glands of the venerated ones. As you may have assumed, this is obtained from bosses, of course.

He will ask you to take them to him so he can extract the genuine Nektar, just enough so that he can heal himself since he is in chains and cannot move. In addition, it is what he offers you in the story: “Perhaps you too can use them to free yourself from this cursed land.”

After you’ve explored different regions of the map, you can only get four Receptacles, all in this initial region of  Fallgrim, and from there continue to advance through the rest of the world. When you know where they are, go and get into them, but they will not be able to change with each other.

The ones you get are stored in the first Pantheon you visit and that’s where you can trade with each other. From the main menu, you will only be able to see its statistics and name if you have discovered it. As with weapons, you can take one with you, no more. ¿ And armor? There is no, that element is dispensed with by having the different Receptacles and the ability to Harden.

An interesting detail is how to get these weapons, the first of which will be fighting a boss. By doing this, you will see another change:  you cannot carry more than one weapon, you have to change them at certain points in the game.

Although the weapons can be improved in one way or another, as you can see above. One of the objects, for example, is this one that you can see and which is called soothing acid, when applied to the weapon it will increase its strength; a curious thing that what calms you makes you stronger.

Not all role aspects have been removed.  Talk to Genessa and a skill tree will open that we can unlock with TAR. TAR is like experience, it is earned by fighting and defeating enemies, or with objects; The first thing that we can acquire with that is the name of the Receptacle that we control. For the other skills, they need much much more TAR.  TAR is not preserved if you die, it is lost a little. Let’s say that is the only thing that is lost when you die.

Ok, am I ready to fight?

Yes, but you will have to explore some somewhat confusing maps to advance. They are labyrinthine, everything leads anywhere and we get lost easily: forks, gaps in walls, cliffs … At every corner, there is an enemy and everyone will want to kill you.

If you remember correctly,  Sister Genessa is a point of return to the world without penalty, you can find a route and then explore the map calmly. The design is harrowing, as well as a wonderful soundtrack. It is a compendium of the good things about mystery games, coupled with a medieval atmosphere that seems to prevent you from moving forward.

What are hitboxes and why are they CRUCIAL in video games?

Mortal Shell has a save system in important moments, but we will always return to Genessa when we start the game. Take this into account if you stop playing very far from it since even if it has been saved at a specific point, we will start over from the last Sister visited.

Well, now is the time to die?

More or less, yes. Just kidding, but generally, once we’ve got everything mastered, some matches will become relatively easy. Note that Harden has a somewhat short cooldown, just 6 seconds and that you can see in the lower-left corner. This means that we can fool the enemy by attacking, turning into a rock, and then making a combo.

How to get an Australian Passport while living in the UK