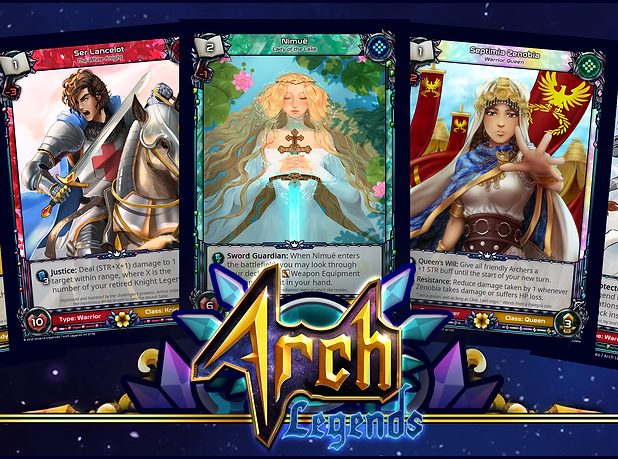 Arch Legends is a trading card game that combines tactical strategy games with card games. During the gameplay, players may summon legends from different timelines on a randomized battlefield.

Unlike most games that require the gathering of resources to summon legends, this game requires no resources. Instead, when a legend is summoned, the player gains knowledge points, a resource used to activate cards during various phases of the gameplay.

When a legend is defeated during the battle phase, the player’s morale dips according to the morale penalty stated on the legend’s card. The more powerful the legend, the greater the penalty. When a player’s morale turns to zero, they automatically lose the game.

Every new game is a unique challenge for players as the battlefield is created by the randomizing of terrain cards assigned to each tile. Different types of terrain tiles have different effects that may potentially change the gameplay dramatically.

Each player begins with a base card at the “starting point”. Each base card provides special and unique abilities to the legends placed on the playmat. Bases are based on historical location references, for example, Camelot, the Great Wall of China, Yggdrasil, and Ibrahim Palace.

Legends in the game must be within attack range for their attack to take effect. The attack range is indicated on the top right corner of the card. Damage taken is permanent and can only be restored when healing abilities or cards are used on it.

Each legend has its own unique set of abilities. Some legends can unleash special attacks that deal damage and inflict status effects on others. Other legends have “outside of battle” abilities that can be part of combos or strategies used.

Legends are divided into different unit types such as warriors, archers, sages, and ballistas. Each unit type has a class of its own including Knights, Samurai, and Magicians.

Arch Legends aims to unite the world’s cultures and heroes into one. Players will experience different art styles and come into “contact” with famous heroes from different countries and cultures, such as King Arthur, Zenobia, Miyamoto Mushashi, and many more in future expansions.

The booster packs include cards containing QR codes for players to scan and watch the background stories of the legends involved in the game. These videos allow players to learn the legends’ mindsets, philosophy, and history.

How to sell products on Etsy