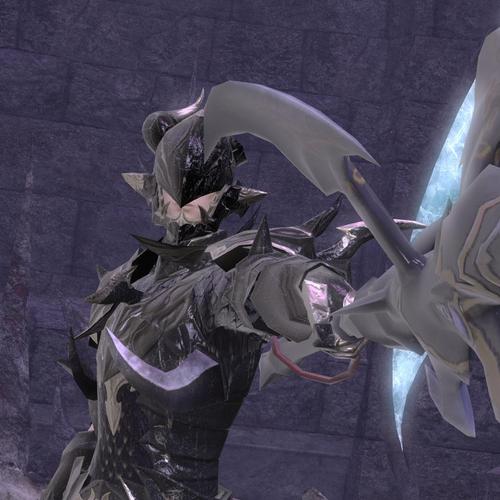 Estinian is one of the characters that appears in FF14. Originally, it was a minor role that appeared in the subquest that occurs only when the player is a dragoon, but it was selected as a character in the main scenario with the expansion disc “Soten no Ishgard”.

At the 2018 Sapporo Snow Festival, the Ground Self-Defense Force produced a snow sculpture with Estinian as the main character, and projected the image by projection mapping to reproduce the famous scene in the work. 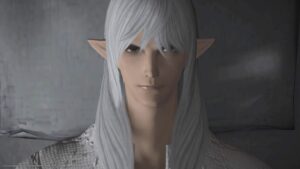 Full name, age unknown. The race is the Elezen tribe with pointed ears like an elf.
The two names are “Kiryu”, and when participating in an event battle during the scenario, they stand by the player under the name “Estinian of the Slaughter Dragon“.
Originally, it was treated as a sub-character that appears only in the sub-quest that occurs only when the player’s job is a dragoon, but it was selected as the leading role in the main scenario of the expansion disc “Soten no Ishgard”.

For 1000 years, he has the title of “Blue Dragon Knight” in Ishgard, which is in a state of war with the Dragons led by the evil dragon Nídhogg.

“Ao no Ryu Knight” is the title of a dragon knight who has awakened to “the power of the dragon”. “Dragon power” is the skill to manipulate the enormous ether (magical power) accumulated in one eye of the evil dragon Nídhogg, which is a treasure of Ishgard (the first “Ao no Ryu Knight” scooped out from Nídhogg) That is.

However, due to the personal temperament of Estinian who prefers to act alone, he does not act in response to orders from anyone, and he roams in Ishgard freely.

Because he does not hear instructions, he is often named as a problem child in the upper ranks of Ishgard.

Aimelik, the president of the Knights of the Temple, who is responsible for the defense of Ishgard, is his best friend.
They have been ties to each other before becoming the “Ao no Ryu Knight” and the President of the Temple Knights, and they are intimate relationships.

There is a scene in which Aimelik accuses Estinian of acting self-righteous as the president of the Knights of the Temple, but Estinian does not seem to care.

I was born in a rural village called Ferndale in the countryside of Ishgard.
Born as a Ferndale shepherd, he lived an ordinary life surrounded by his parents and younger brother.
However, while Estinian goes grazing sheep, the village of Ferndale is attacked by the evil dragon Nídhogg and burned down.

Estinian, who survived alone, was taken over by Alberik, the predecessor of the “Blue Dragon Knight” who came to Ferndale, which was burned down in response to the news of the appearance of the evil dragon Needhögg, and learned spear techniques with Alberik as his master.

After growing up and becoming a dragoon, Estinian has a grudge against Nídhogg, who burned his hometown, and actively participates in dragon hunting (subjugation of the dragon tribe).
Estinian was eventually called by the two names “Kiryu” because he killed him regardless of whether he was a dragon or a child dragon.

A self-righteous and lone wolf personality.
I hate swarming without depending on others, but that doesn’t mean I’m ruthless.
It is difficult to convey his feelings and thoughts to the people around him because he rarely speaks out, but he has a personality that considers the weak and the weak.
In addition, we will respect those who we recognize, regardless of their position or status. On the other hand, he is cold-hearted toward those who do not like it, and takes an attitude of ignoring even if the other person is his boss.

I often say harsh words to people, but those words are often right.
To the player who is going to board the residence of Nídhogg, “I can not sit here and wait, even though the player who is a human being outside Ishgard gives his life, I decided to devote myself to Ishgard.” He told Aimelik, “You have the role of defending the imperial capital, just as it is the role of the dragoons to hunt the dragons, and you, the president of the Order of the Temples that protect Ishgard,” and stopped accompanying him.

Maybe because he lost his younger brother at a young age, it’s a little sweet for a boy who longs for himself.
In the main scenario of “Ishgard of the Blue Sky”, a 16-year-old boy named Alfino appears, but there is a side that the shadow of his younger brother overlaps with him.

Estinian in the scenario of the new FF14 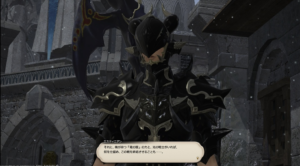 The subquest “Dragoon Job Quest”, which will be described later, will be the first meeting with Estinian.

If the player is not a dragoon job, the main scenario of the new FF14 (patch 2.0) is over, and it will be the first time to meet in the main scenario of the prologue part that continues to the expansion disk “Soten no Ishgard”.
The evil dragon Nídhogg attacks Ishgard and sends Nídhogg’s genus Vishap to Ishgard. Appear in front of the defense battle.

Estinian has a “dragon’s eye” stolen from the Holy See of Ishgard, and says he stole it to divert Nídhogg’s aim from Ishgard. However, Nídhogg, who sensed that the “Dragon’s Eye” had moved from Ishgard, thought that the Ishgard side was willing to do something, leading to this attack. He says that what he did to protect Ishgard put Ishgard in jeopardy as a result.

Estinian in the scenario of the expansion disk “Ishgard of the Blue Sky” (patch 3.0) 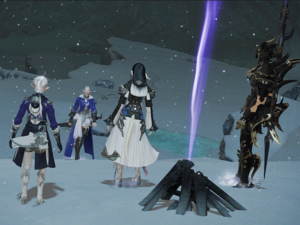 At the end of the scenario of the new FF14, the player is in a position to be chased, and is hidden by the knight Orshfan who is in charge of defending Camp Dragon Head, one of the forts of Ishgard, and escapes into Ishgard.
The escape was accompanied by Alfino, a boy who is the leader of Crystal Brave, an organization that seeks relief for Eorzea (the stage of FF14).

Knowing the current state of the war between the dragons and Ishgard, Alfino dreams of reconciling with the dragons and wants a dialogue with Hræsvelgr, the brother dragon of Nídhogg. He intended to have Hræsvelgr, who sang neutrality, mediate and demand that the 1000-year-old war be stopped.
The player will head to Hræsvelgr with Alfino.
Detecting the movement, Estinian offers to accompany him because of his personal interest.

With the addition of Iselle, the leader of the “maverick” faction who shares ideas with Nídhogg and tries to destroy Ishgard, the player, Alfino, and Estinian head for Hræsvelgr.
However, Hræsvelgr refuses to arbitrate the war and accuses humans of the reason why the war lasted for 1000 years in the first place.

Once upon a time, Ishgard and the dragons coexisted. However, humans who learned that the secret of the mighty power of the dragons lies in the “dragon’s eye” (the dragons have the ecology of accumulating their own ether in their eyes), and ratatosk, the sister dragon of Nídhogg and Hræsvelgr. He was deceived and killed, and robbed his eyes. Nídhogg became angry when his younger sister was killed, and began to grudge against humans. Thus Ishgard and the dragons became a war.

Hræsvelgr had a human who he loved when humans and dragons coexisted, and the resentment of the human whose sister was killed is no different from Nídhogg, just by not participating in the war without exempting her. Therefore, he slammed the party’s request without arbitrating the war.

The failure of the dialogue with Hræsvelgr realizes that the war will not end unless either Nídhogg or Ishgard is destroyed.
Iselle is stunned by the cause of the war spoken by Hræsvelgr, but Alfino manages to find a way to talk. Among them, Estinian decides to hunt Nídhogg.
Then, Estinian and the player board the Nídhogg’s residence “Dracons Airy”.

By weakening the power of Nídhogg using the “Dragon’s Eye”, Estinian finally succeeds in defeating the evil dragon Nídhogg and defeating his parents and younger brother.

At this time, Estinian’s armor is bathed in the blood of Nídhogg and dyed bright red.
Estinian scoops out the remaining eye from Nídhogg. This should have robbed Nídhogg’s eyes, but I don’t feel the energy of my own “dragon’s eye” in the eyes I’ve just robbed.

In fact, the eye I just stole was the one eye that Hræsvelgr gave to Nídhogg. Nídhogg had already been deprived of both eyes 1000 years before the beginning of the war, and Hræsvelgr lent his right eye.

Then, where did the right eye of the real Nídhogg go, and the party asks for the whereabouts of the right eye of Nídhogg.
In it, he learns that Pope Toldan of Ishgard is trying to take a ruthless measure to sacrifice all the people of Ishgard as a force to subdue all the surviving Nídhogg genus. In order to prevent the Pope, the party follows the Pope to the “Demon Continent”.
From the Pope’s mouth, it becomes clear that Nídhogg’s right eye is sealed in the body of the first “Ao no Ryu Knight,” who is said to have robbed Nídhogg of his “dragon’s eye” 1000 years ago.

After defeating the Pope, the player gets Nídhogg’s right eye and hands it to Estinian, who arrives late.
With this, Estinian finally got both eyes of Nídhogg. After that, if you throw these eyes into the sea of ​​clouds, which is said to be out of reach of humans, and discard them, Nídhogg will die completely. 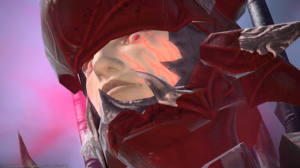 Estinian, the incarnation of Nídhogg, appears on the spot and pierces Hræsvelgr’s genus Vídópnir with a spear.
Estinian then declared the final battle to come in front of the people present at the ceremony and flew away as the evil dragon Nídhogg.

Player and Alfino devise a plan to save Estinian who became Needs Heg.
The Estinian who became Nídhogg is not the Nídhogg itself, but the state in which Nídhogg’s grudge is embodied and overlaid, and Estinian is like being wrapped in the cocoon of Nídhogg’s grudge. ..
If so, Alfino thinks that Estinian could be rescued by tearing off the grudge of Nídhogg, who is the cocoon.
To do this, the “dragon’s eye” that is eroding Estinian’s body must be physically peeled off from Estinian.

Thus, the player challenges the final battle with Nídhogg, who has taken in Estinian.

The player then defeats Nídhogg, who wields power in the form of Estinian, and succeeds in pulling the “dragon’s eye” from Estinian’s body with Alfino. The “dragon’s eye” was abandoned in a sea of ​​clouds, which was out of reach of humans, and was buried forever.

The rescued Estinian was taken to a hospital in Ishgard where he was treated.

Estinian in the scenario of the expansion disc “Liberator of Guren” 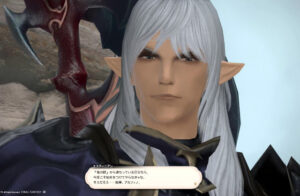 The medium for summoning the god dragon was the “dragon’s eye” that the player should have thrown into the sea of ​​clouds.
Knowing that the eyes of his partner, Nídhogg, were used, Estinian pursues the god dragon on his own.

Then, Estinian, who appeared after the player who defeated the god dragon, thrusts his spear at the “dragon’s eye” rolling in the roof garden of the Gallemar base, which is the place of the decisive battle with the god dragon, and gives an eternal farewell to Nídhogg. Tell.