In this world where there are hardly any pieces of land left, neither the ships nor the ships are the protagonists: the horsemen and their huge armed hawks are. We explore this beautiful world in The Falconeer review.

It doesn’t matter if you control a ship, a modern fighter or a hawk, these types of air battle games have a common denominator and a game system that is difficult to analyze. Because what is it that makes some games stand out while others fall into oblivion? Perhaps a mixture of polished control, robust and varied mechanics, and intricate tiered design, because the airspace can turn out to be too homogeneous. In fact, even in the great Star Wars: Squadrons, recently launched, that impresses with its beautiful vision of space, and its systems of balance between weapons, energy and shield; I finished the campaign feeling that the levels could have been used more. Create more situations where tight space or navigation between asteroids or the contours of a space station would carry even more weight.

No, making a game with flight mechanics is not easy. For this reason, seeing that a developer like Tomas Salas (known in the world of mods for his contributions to Skyrim) ventures to do it practically alone, it seems to me quite a feat. And The Falconeer has that hallmark of the author, which can be seen in the harmony of color and the maritime world he has created for the occasion: a group of archipelagos divided into factions where war, pirates and empires fight for the dominion of the territory and trade between islands. The difference is that, although they have advanced ships and ships, the warlike superiority is provided by the hawks: huge agile birds that mount horsemen and powerful weapons.

Despite the beauty of this world, however, the pattern soon begins to unfold. The game is divided into chapters, missions and secondary tasks, but the routine quickly takes its toll and the player discovers that The Falconeer has a hard time breaking away from the structure of his missions. At first, these are easy to get into the world around us, but after a few hours in the game we discover that things have not changed much. There are missions to deliver documents and resources, investigate areas, fight with enemies or escort a companion. 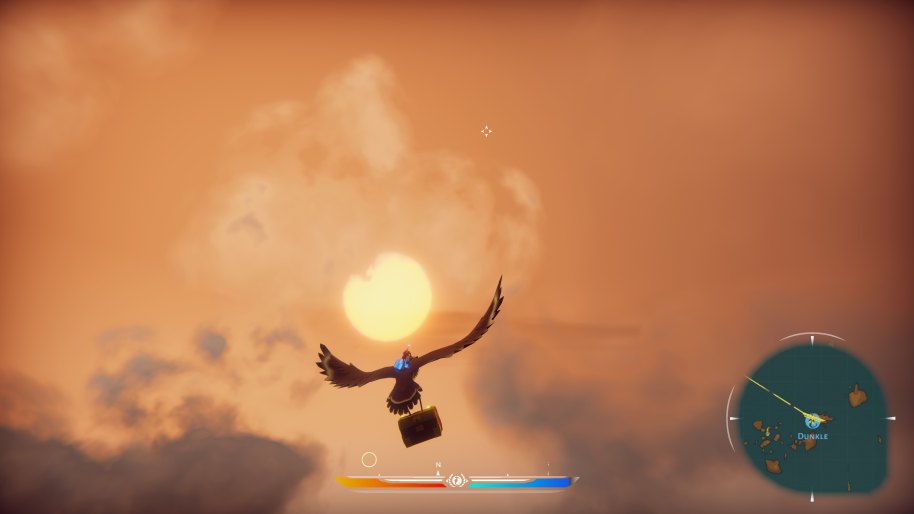 The colors in The Falconeer create beautiful prints as we fly over this eternal ocean.

Few times in the development of these missions have we seen something that is outside the norm. Yes, sometimes we can collect water mines to drop on a ship and do much more damage than with our weapon; in others, you have to storm enemy fortresses and take care not only of their air units, but also their defensive turrets. But, in the long run, the game does not present situations that put our flying abilities to the test. The ruins and archipelagos that we fly over are hardly used to add some extra risk. The world is simple and open and only restricts a certain area when we go into battle.

Controlling your rider and his falcon is a pleasant experience. There is no doubt that Salas has put a lot of effort that the control of the hawk is very polished and responds to the greater subtleties of the control stick. The precision and response is unbeatable; or well, it could be if we had a 120 Hz television ,as the game is capable of these high refresh rates and I can only imagine that it would improve that control even further. But even though the movement is fluid, the battles become routine again. Once you’ve fought a few times, you’ve already had a good taste of what to expect. The artificial intelligence of the units is not capable of surprising the player and, when he is close, he turns into a constant turn with each other without applying different dynamics and maneuvers to dogfighting, beyond being able to make some sharp turns to get out gracefully of some situations. In the following chapters, the enemies are refreshed, adding new units and some more powerful ones, but almost all their patterns are very similar and, beyond the aesthetic, there are few differences. 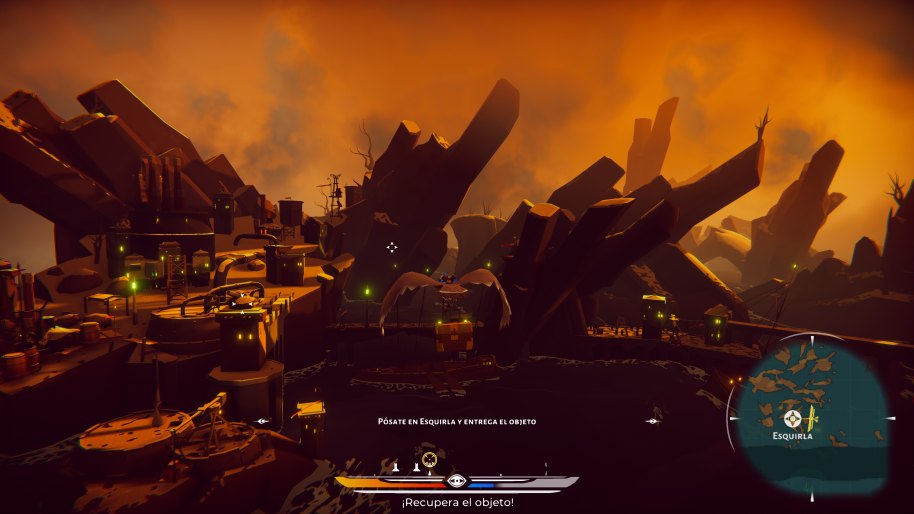 Everything is relatively simple and perhaps that is the problem with The FalconeerThe Falconeer creates a progression system to mark the difficulties of the main missions and allow the player to customize their falcon and rider a bit more. At the base we can replenish our ammunition and weapons, as well as improve the mutagens that somewhat alter the bird’s flight capacity, while the interesting thing comes with the permits: a series of documents that, when purchased, allow us to trade with other cities and Get extra abilities, such as magical abilities for our creature that give us greater damage or health.

Even so, it is all relatively simple and perhaps that is the problem with The Falconeer: it does not encourage you to continue exploring this marine world, beyond enjoying the pleasure of flying and its beautiful changes in light and color. An attempt has been made to liven up the experience with a story that seems intricate due to the political and commercial relations between the different factions that populate the archipelagos, but everything is told in simple expository dialogues that do not help to capture the interest of the player. 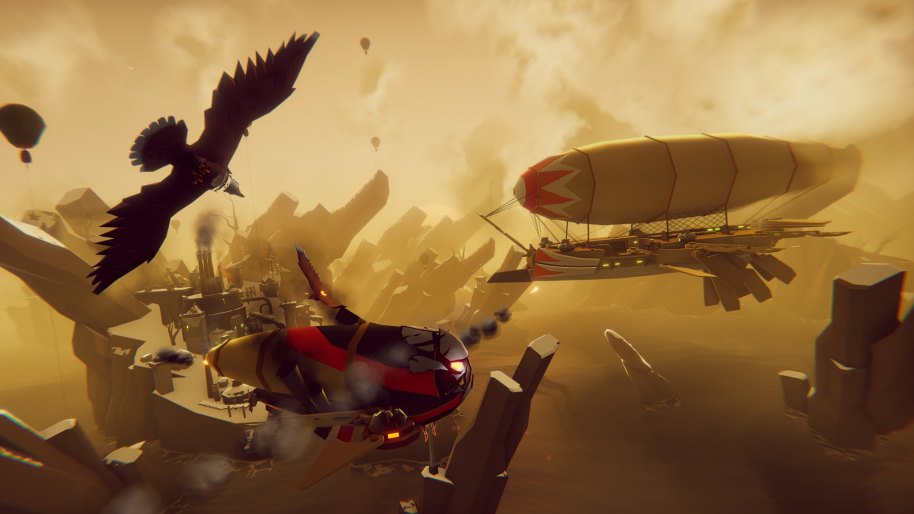 It also doesn’t help that mission design is so slow; Many of them begin with the simple task of going to one point and flying over it, then going to another and doing the same; without just touching the controller until the enemies appear and the combat begins. The biggest problem lies in the moments when we die, since we will have to repeat the mission from the beginning. There would be no problem in this, in principle, if it weren’t for the fact that we have to go through those “dead times” again in which to fly over areas or escort the ship until the action begins, which considerably breaks the rhythm of the games the highest difficulty peaks. Spikes that encourage us to deviate from the main story to improve our equipment by completing secondary missions, both or more routine. 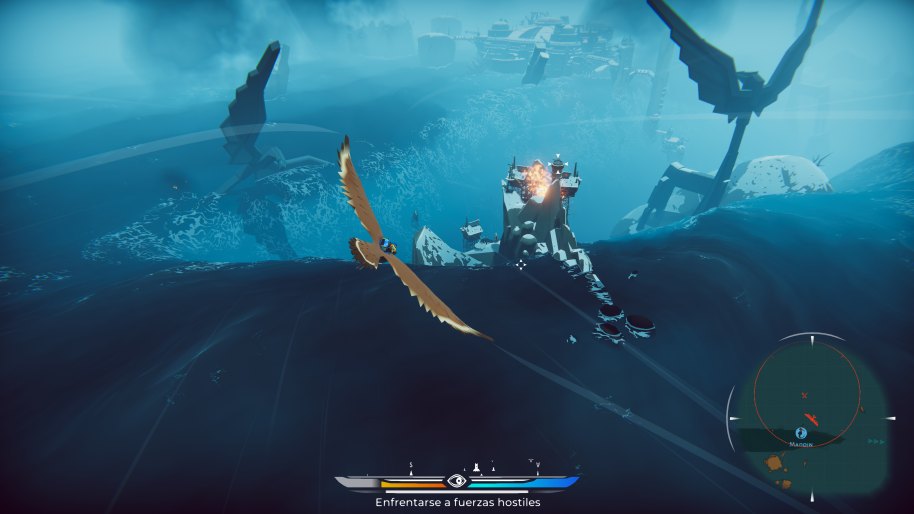 The fighting becomes somewhat repetitive once we get the hang of the enemies.

The Falconeer is striking because its pleasing visual style fits very well with the values ​​of the new generation. Although it is not a graphically ambitious game, playing it on an Xbox Series X allows us to have an experience at a resolution of 4K and 60 fps or 1800p and up to 120 frames per second that favors it a lot, not only because of the smoothness in the controls, but also for being able to appreciate enemy units and distant elements much better. As confirmed by Salas himself, the game could have rendered perfectly at 4K, but the fps would have been relegated to around 100fps and he decided to favor the latter for this mode. In S Series, we can choose between 1800p and 60 fps or 1080p and 120 fps.

The Falconeer is a colorful game, with a very achieved fluidity and precise control, but in the long term, it presents moments of fatigue, when entering a too routine dynamic in its missions and combats, which are the core of the experience. The feat of Salas is appreciated for carrying all the weight of the game in charge of a single person, but there are certain elements, in the artificial intelligence of the enemies and the design of the missions and levels that perhaps would have benefited from a second opinion.